The gloves are off in a battle for prime time ice that has some young female hockey players saying they’re getting shut out at many of Toronto’s arenas.

Ron Baker, president of the Toronto Leaside Girls Hockey Association (TLGHA), alleges the city’s equity policies are not being followed, and some arenas are discriminating against girls by shutting them out of the coveted weeknight ice timeslots.

The city’s equity policy states that youth recreational hockey is given priority for ice, followed by youth competitive hockey, and finally, adult shinny.

According to Baker, the purchase of prime ice time has cost his association $1 million more than it would have had the girls been able to use cheaper, city-run rinks.

Baker says leagues are supposed to be allotted ice time based on how many players come from the immediate area. Instead, he says, groups are being given time based on their historical usage.

“If you’re there to represent a community, why would you do it based on historical use?” Baker says. “We respect the past, but we allocate resources based on who lives in the community today.”

Baker says nearly a quarter of the 800 TLGHA members live within close range of North Toronto Memorial Arena, but the league has no prime ice time at the arena at all. Baker says 131 members live near Larry Grossman Forest Hill Arena, but they only have four hours of prime time ice a week there. He says the numbers are similar at Ted Reeve Arena.

“When we go to an arena like North Toronto, the basis of allocating ice should be based on how many players live in the community,” Baker says.

But city councillor Karen Stintz, who is also on the management board at Larry Grossman arena and North Toronto Memorial arena, disagrees, saying it’s an ice shortage problem.

She says the success of the TLGHA has led them to outgrow the available facilities in their neighbourhood and move into other areas.
“The groups getting ice time have long histories, and paid for and funded these rinks,” Stintz says.

Baker says it is true there isn’t enough ice, but he stands by the assertion that the girl players are not fairly considered for ice time.

“We’re not asking for greater, not for more, just what’s equitable,” Baker says.

A petition for equitable ice time started by Baker is currently circulating, and is set to be be presented to city council Nov. 30.

Kim McCullough, one of Canada’s top female hockey players, and a former TLGHA member, says girls have traditionally had to fight for their right to play hockey.

“The situation 15 years ago was virtually identical to what (female players) get now, but they have twice the number of players now,” McCullough says.

Many female players throughout North America and Europe have shared similar experiences, she said, and they hope Toronto will set an example.

“For years, we were just happy to get what we got, even though it was close to nothing,” McCullough says. 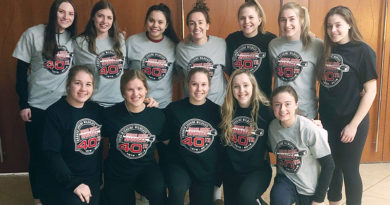