Restroom will be second one in TO

It looks like Woodbine Beach will soon become the home of Toronto’s second self-cleaning public toilet as part of the city’s street furniture deal with Astral Media.

“They’re just getting the permits now and we’re hoping to get it in in the spring,” said Fiona Chapman, manager of street furniture management, of the $400,000 stall.

The first such toilet opened in 2010 at the corner of Rees Street and Queen’s Quay West. Astral Media will install 20 of the toilets in Toronto over the period of the 20-year contract and pay all costs associated with the washrooms, including installation and upkeep.

For 25 cents, the user is granted uninterrupted access to the facility for 20 minutes, after which the door automatically swings open.

“What happens before that is, the lights flash and it’s initially a warning that your time is up,” Chapman said. “The concern from some of the members of the public was that somebody is going to go in and camp in there and live in the washroom as a cheap form of housing.”

Chapman said there have been no issues with people trying to occupy the three-square-metre washroom on Rees Street.

In a year and a half, the only mechanical problem was the toilet seat failing to retract during the automatic cleaning of the stall back in July, and the issue was resolved within 40 minutes, Chapman said.

“When there’s a malfunction there’s an update that goes directly to Astral and they send their emergency staff to repair it,” she said.

Aside from the new high-tech toilet, several of the area’s public restrooms have recently been renovated. Facilities at Silver Birch Park, Pantry Park, Summerville Pool, Woodbine Beach, Cherry Beach, Kew Gardens and Ashbridges Bay underwent upgrades in the fall and winter at a cost of about $850,000.

While the renovations and the super stall are a welcome addition to the beach area, owner of Boardwalk Pub in Woodbine Beach, George Foulidis, said he would like to see even more washrooms in the area. During the summer months he says his business is inundated with beach-goers entering his pub solely to use the washroom.

“Regardless of how good they upgrade them there’s not enough,” he said.

“It’s a question of quantity not quality.”

Foulidis called the possibility of a new potty a positive, but said it would probably have little impact on his business.

“That’s only one person at a time,” he said. “I don’t think that’s going to make a dent in the volume of people, but it’s a nice thing to have. Absolutely it’s a nice feature.” 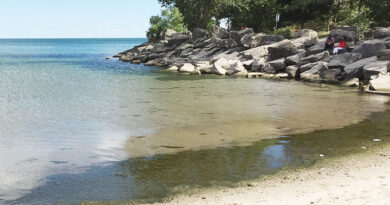