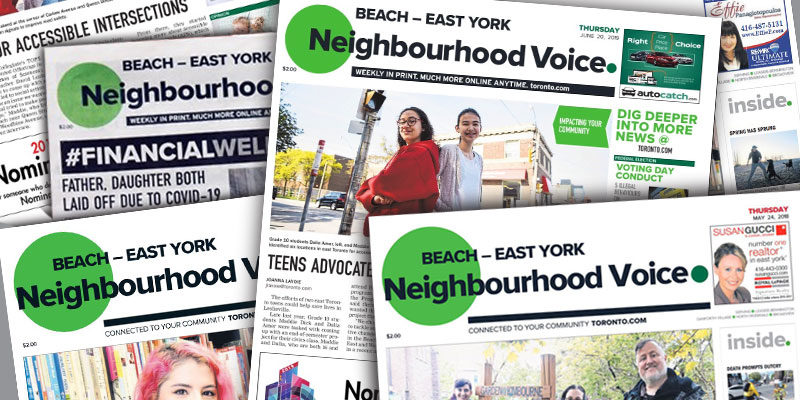 A community newspaper covering East York and the Beaches has become one of the latest publications to shut down their print editions and take up full-time residence online.

The ongoing COVID-19 pandemic appears to have been the last straw for the publications, which had been struggling economically.

“Advertising revenues, which have been steadily declining for a number of years, have fallen even further in recent weeks,” said a statement published on Toronto.com. “Over those years we have taken many steps to reduce our operating costs while striving to maintain regular publication of these newspapers. But the current economic crisis has resulted in the printed editions being no longer economically viable.”

The company claimed a weekly circulation of 58,650 papers in the Beaches and East York area.

Publication of local news is to continue on the website Toronto.com, another publication in the Torstar-Metroland stable.

The day after the announcement, reporter and columnist David Nickel recalled on Toronto.com how the paper’s forerunner, the East York Mirror had in the 1990s been the first Metroland paper to serve a small area.

“The East York Mirror was an experiment — covering a tiny and proud municipality that was as close a thing to a small town as you might find in the 416 area code,” wrote Nickel who was in on the founding.

“For close to three decades, the East York Mirror was a flagship of papers covering communities in the downtown, in the old City of York, the Beach and Riverdale, in Bloor West Village, Parkdale, the Annex and the northern part of Toronto’s City Centre,” he wrote.

The East York and Beach papers merged to become the Beach-East York Neighbourhood Voice in 2018.