It was a bright and sunny day and the Beach was awash with the sights, sounds and sweet treats of the 44th annual Toronto Beaches Lions Easter Parade.

Hundreds of revelers, young and old, lining Queen Street East to see parade floats, listen to marching bands and chocolate treats while catching a glimpse of the Easter Bunny.

“It was wonderful … and I think it was the largest turnout we ever had,” said Sharon Ramsden, director of the parade. “I estimated about 50,000 (spectators).”

To celebrate its 75th anniversary the Toronto Beaches Lions the parade featured the theme of Easter throughout the ages and brought in antique cars, fire engines, streetcars and zambonis.

The Easter parade is one of Canada’s largest and featured a hundred floats and 10 marching bands including The Shriners’ Musical Train and the York Lions Steel Band. Prizes were awarded to entries with the best themed-costumes.

This year’s Grand Marshall’s were Harlem Globetrotters Moo Moo Evans and Blenda Rodriguez who strutted their stuff displaying their dribbling skills and trick moves for the on-looking crowd.

“Our Grand Marshalls were a really big hit with the kids, the whole parade was very entertaining for the children,” Ramsden said.

“The last parade was so enjoyable and this year it got much bigger,” she said. “There is so much for the kids to see, they just love the floats,” she said.

Ramsden says that she really enjoys working on the Easter parade and was pleased with how this year’s event turned out.

“It was a fun time. The floats were well decorated and fun to see, the music and the bands were great,” she said. “It’s a really good family outing to attend.” 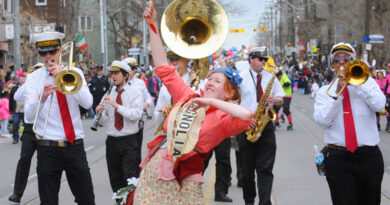 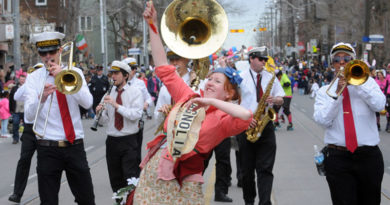