He may have turned the page, but he sure hasn’t closed the book.

Joe Cernyakovich took a 30 year old, second-hand book shop located in the Newtonbrook Shopping Centre in North York, moved it to midtown and transformed it.

The Book Shoppe, which opened Nov. 1 at 962 Eglinton Ave. West near Bathurst in the former space of Marina Lemoyne Couture, represents a new chapter in the life of the business.

Cernyakovich says he didn’t like the former North York location so he moved the business to Eglinton Avenue West, where there are lots of restaurants and boutiques, but no bookstores.

The business, he says, has adapted to the neighbourhood. Where customers of the old location bought romance and thriller paperbacks, those at the new one are looking for coffee table books, contemporary novels and art books.

Though Cernyakovich has a diverse background — he was in the aerospace industry for 12 years as a draftsman and technical illustrator and has been a crossing guard at Bathurst Street and the 401 for four years — working in the book biz has been a dream of sorts.

“I always wanted to have a book shop,” Cernyakovich says.

Every time he would shop, he says, he’d come home with a book.

Now many of those tomes — mostly art, reference, aviation and transportation-related — are in the store for sale. In addition to other categories like self-help and art history, there’s also a small Judaica section that’s doing well, he says.

Cernyakovich juggles his time between his business and his second job and says he sometimes has to close the shop if he can’t get someone to mind it during the hours he’s away. He quips that when he’s in the store and doesn’t feel like working he sketches — he’s an artist first and foremost, he says.

He created the large painting of a mountain that hangs in the shop. Books, all what he calls previously enjoyed, are half the price or less of the publisher’s price, he says, and he’ll take books from the community, either donated or in exchange for a store credit. 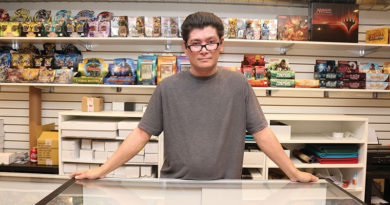 Bookstore is a family affair