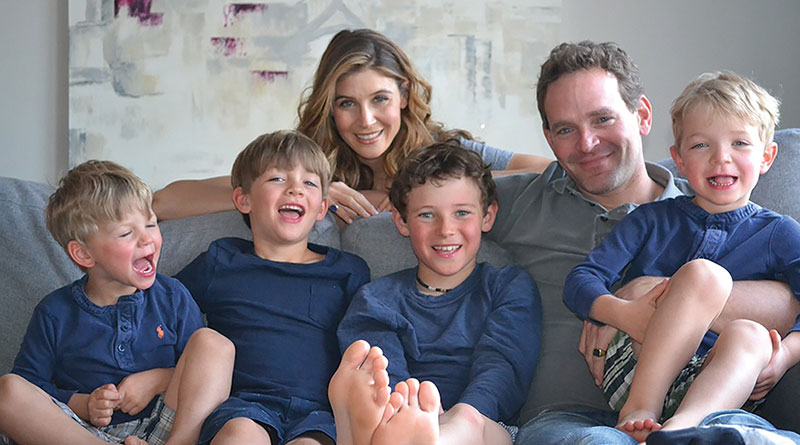 As a child, Andrew von Teichman was bullied for wearing an eye-patch to treat his astigmatism. That experience helped determine how he and his wife, Natalie, would later raise their own four sons.

The boys — William, 8, Hudson, 6, and four-year-old twins Dax and Holden — were in fine form during a recent interview at their midtown home. The twins bounced across the hardwood floor duelling with light sabres while Hudson and William snuggled up to their parents on the couch.

“Whenever we have our family dinner, we play a game called Rose, Thorn, Bud,” Natalie said. “Our rose is something good that happened, our thorn is something we didn’t like and our bud is what we learned.”

Hudson made sure to mention he “usually has lots of buds.”

Two bottles of wine, one red and one white, sit on a nearby table. The labels feature a bear with an eye-patch and read “D’ont Poke the Bear.”

After bonding with business partner Allan Jackson over being bullied as children, Andrew and Jackson, the co-founder of Jackson-Triggs winery in Niagara, created the wine. The label and name were born at the dining table.

“We were having dinner and I said, ‘Oh, don’t poke the bear now,’ and our designer had never heard the term before,” Andrew said. “When I explained it to him, he said, ‘There’s our name.’”

The peculiar spelling of ‘don’t’ was an error, but it stuck.

“It was so embarrassing because it was such a clear typo, but then we thought, ‘Wait a minute, our wine is Canadian’ and sent it back,” Andrew said.

D’ont Poke the Bear launched at the LCBO in August 2017 with enough bottles to last until November 2018. However, it sold out in two months.

Natalie and Andrew created the Friends First Foundation at the same time to raise funds for anti-bullying initiatives. Up to $1 of the proceeds from each bottle of wine, which retails for $14.95, goes to the foundation. As well, 20 per cent of merchandise sales are donated to it.

“We’ve raised over $40,000 since we started,” Natalie said. “We’re about empowerment. That’s what Canadians do.”

Keeping their kids in mind, the von Teichmans want to reach out to local city councillors and schools to fund anti-bullying programs.

“It adds a different layer to parenting. Everyone has been affected by bullying and we try to teach our kids to step up,” Andrew said.

The foundation is working with the Canadian Red Cross, Kids Helpline, the University of Toronto and Bystander Revolution and may even look to create an app. They are also launching a cider in the summer.

Meanwhile, William, the oldest of the four boys, has advice for anyone who sees someone being bullied.

“Put someone in your shoes,” he said. “You feel what they feel and it hurts. You should try and make them feel better.”

A vino to complement the bird

A toast to Leaside for new businesses