Although one of the best sellers at the newly opened Beach store Bello Bio is a meat alternative called Muscolo di grano, packages of the staple have been shipped as far as Afghanistan.

“A captain in the navy, his wife is stationed in Afghanistan right now and she loves this meat alternative,” owner Mauro Di Martino says. “The product was purchased at our store and then shipped by the husband and friends to the soldier in Afghanistan. We’re super proud of that, Canadian military. It’s gratifying.”

Although Di Martino and his wife Lisa had already been selling organic, vegan, Italian food online as Di Martino Organic Imports, they recently opened a physical store on Queen Street E. at Munro Park Avenue and offer in store sampling and recipe suggestions.

“We chose Italian organics because in Italy genetically modified food is against the law so we know that whatever we’re selling has non-genetic modified organisms and that’s super important these days,” he says, adding his family became vegans seven years ago out of compassion for animals and wanting a healthier lifestyle. “The people that we buy our products from are medium sized family run businesses that put their heart and soul in what they make and it comes out in the products. They are not substitutes for anything, they are great products on their own.”

While all the goods contain no dairy or meat and many are also gluten free, the pair describes their offerings as good Italian food. In addition to meat alternatives, jams, ravioli, organic drinks and vegan cheeses, the Mozzarisella being the most popular, which is made with sprouted brown rice, they also create prepared dishes to go including soups, sandwiches, pasta and tiramisu.

“Bello is an Italian adjective meaning beautiful,” Lisa explains. “And bio is the abbreviation for the Italian word biological meaning organic so everything here is certified organic and Italian, that’s why Bello Bio.”

After fielding many requests from customers and enjoying the one on one interaction with people at events and food festivals, they decided to open a retail location as a “year-round trade show.”

“When people say we don’t get this kind of service elsewhere, you know the sampling and the personal one on one, that makes us feel good because what prompted us to do this store was the shows because at the shows we’re really in our element,” Di Martino says. “That’s where we talk to people, we get them to try the food, they’re exchanging recipes, this is an extension of that.”

Although the couple searched for a small location in order to maintain personalized service like typical Italian boutiques, they are planning on expanding their dessert and prepared food offerings and down the line finding a way for people to eat in house.

On Feb. 18, they will be taking part of the Family Day festivities along the street and will be letting people taste their dessert.

The Di Martinos recall how over the holidays a customer came to the store in search of food since she had family over and one of her three sons had a vegan girlfriend.

“She had no idea what to do so she came in here,” he says. “We helped her get a little meal plan together for the girlfriend and after she called and said not only did the girlfriend like it but the other sons and herself, they really enjoyed it too so that makes us happy.” 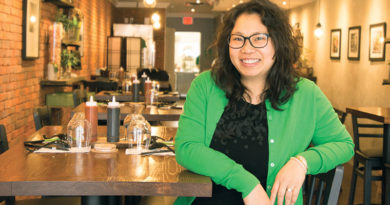 He be jammin' in the Junction