Along with a few volunteers from St. Olave’s Anglican Church, Burrows cruises around downtown Toronto, ladling soup for the homeless. He follows up the soup with an offering of juice and fresh bread.

Should someone need it, Burrows and his team also deliver sleeping bags, a new pair of socks and a blanket.

For over 10 years, the church, located in Bloor West Village, has been doing their part to feed the homeless through their Hunger Patrol program.

While Burrows was not the one who started the Patrol, it has been under his supervision since 1997.

“We have had a fantastic response (from those on the street),” said Burrows. “We make really good soup.”

The Patrol runs 10 months out of the year, stopping for a summer break in August and September. Though only absent for two months, “when we’re away, they miss us”, Burrows said.

Upon their return in October, volunteers are met with cheers and applause, he said.

The Patrol has seen a visible increase in clientele since its start 13 years ago.

“Now we have a huge crowd, we’re victims of our own success,” said Burrows, noting they now carry double the amount of soup to meet the demand.

During his time with the Patrol, Burrows said he has come to know some of the people they help.

“Some stay the same, some get worse and some improve,” he said. “Ninety-five percent of them are nice and polite, they say please and thank you, they’re clearly grateful.”

The Hunger Patrol does not appeal for funds, said Burrows but donations in kind are greatly appreciated. They’re need of sports socks (thermal socks), sweatshirts, sweaters and coats as those are the things most needed on the streets.

St. Olave’s will be hosting a dramatic reading of the Christmas Carol on Dec. 5 at 7:30 p.m. to raise funds for Hunger Patrol. The show will feature CBC Radio’s Mary Wiens, a resident of Roncesvalles Village.

Tickets are available at the door, 360 Windermere Avenue. Pay what you can, suggested minimum, $5. Non-perishable food items also welcome. 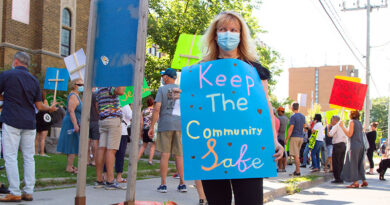 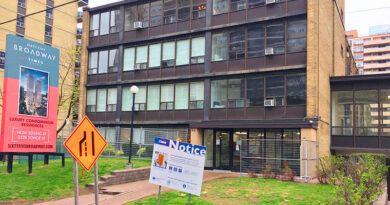