Although Michael Occhipinti has been serving coffee to the community for a decade, Mountain Bean Coffee only recently started serving Alkahol.

In a joint venture with holistic nutritionist Miranda Malisani of Live Light Nutrition, the newly added wellness and juice bar component offers healthy drinks with catchy names like G.I. Juice, Live’r Light and Alkahol, which is made with alkaline-rich fruits and vegetables like spinach, kale, celery, spirulina and apple rather than spirits.

“I’ve designed 10 specialty juices, which all offer different types of combinations good for different things,” says Malisani. “So for example the Bug Buster is an anti-oxidant rich combination so it’s going to boost your immune system. We have wheat grass shots as well, which are really awesome, it’s like having two and a half pounds of green vegetables in one ounce shots.”

Malisani, who also appears as a nutrition expert on The Marilyn Denis Show, says she’s known Occhipinti for 10 years, as he’s her husband’s best friend. She says it made sense to team up at the shop on Eglinton Avenue East near Bayview Avenue because she also wanted a home base for her consulting services.

“I’ve always loved health and I basically got to a point where I was like, ‘I really just want to help people be healthier,’ ” she says.

In addition to her grocery store tours where she takes people through the aisles to teach them about what are the healthiest products in each section, Occhipinti and Malisani are also starting lunch and learn sessions where they educate employees while catering.

“We’re just trying to make it more of a wellness centre, where there’s still some alternative things if you want to buy the cookies and croissants but we’re offering more healthier options as well because there’s nothing like it in Leaside,” she says. “There’s no juice bar, there’s no place where you can kind of get fueled up in a healthy way.”

Occhipinti, who lives nearby at Eglinton Avenue East and Leslie Street, says he’s been at the site for a decade and says its been great being a part of the community.

“I have a good relationship with people, with the community, a lot of people were excited when we said Miranda and I were thinking of teaming up now to bring Live Light Nutrition in here,” he says.

The addition makes them more of a destination shop, he says, adding it’s also been popular with running groups in the area who like their G.I. Juice, which replenishes electrolytes but the pair says is healthier than Gatorade.

“We just wanted people to eat whole, fresh, as pure as possible and I think in terms of the juice bar that’s my objective, people can come in and know that they’re not going to get processed juices,” Malisani says. “This is made to order — you order it, we make it.

“It may take a couple of minutes because we’re making it from scratch you know so you can guarantee that’s its going to be a lot healthier for you.” 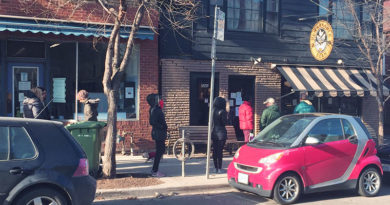 Coffee’s still on, but you may have to line up for it — far apart