Knowing that Leonidas is in the heart of Greektown may have drawn controversy 2,500 years ago, but nowadays, that news has quite the opposite effect.

Of course, Leonidas, at the corner of Danforth and Logan, is a Belgian chocolate shop named after its founder, not the Hero King of Sparta.

The shop opened its doors late last year, and the community has welcomed it with open arms, says owner Mary Caravellos.

Though a Belgian chocolate shop may seem out of place, it’s a great spot for the store, she says.

“The spot here with the fountain,” she said of the public space right outside the store’s windows, “There’s no other spot like this in the neighbourhood, in the summer it’s really good, people hang out here, come in and get their ice cream or gelato.”

Already running a location in the Beach, Caravellos said opening a second location at Danforth and Logan was an easy choice.

“I’m here because first of all, I love the Danforth,” she said.

The store was founded nearly 100 years ago by Leonidas Kestekides, and has grown to now having over 1,400 locations in 53 countries.

“Everything in the store is either from France or Belgium,” she said of the chocolates. With the gelato from Woodbridge, the coffee from Italy and a variety of specialty organic teas, it’s truly a global store. But Caravellos says she’s just adding flavour to an already eclectic neighbourhood.

“I grew up around here, and it wasn’t always the Greektown,” she said, pointing out a number of sushi and coffee shops nearby.
“There’s a lot of Greek restaurants and there’s the Taste of the Danforth, but there are a lot of restaurants with non-Greek owners.”

The feedback from customers has been positive, she reports.

“I haven’t heard one bad thing, everybody says, ‘what a great addition to the neighbourhood.’”

And what separates it from most other chocolate stores, says Caravellos, is the product that goes into the chocolate itself.

“Our chocolates are all made with 100 percent pure cocoa butter, there’s no vegetable fats or fillers,” she said. “You have to appreciate the chocolates, they’re good chocolates.

“You’re not buying a Kit-Kat.” 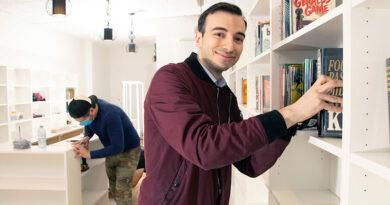 The Scribe brings thrill of rare books to the Danforth