He says he always wanted to build a nutritional empire, and if his recent success on the CBC television show, Dragon’s Den, is any indication, North York resident Ryan Foley is well on his way to doing just that.

The 32-year-old spent 10 years researching and developing the ingredients behind Ageoff, an anti-aging product he launched two years ago under his new company, NuvoCare Health Science.

But as of early January, Foley was undecided if he would take the deal.

There are other investment opportunities out there, he said, and he may need more than $250,000 to finance the marketing and public relations initiatives he needs the investment for.

“My pockets are only so deep,” he said.

Approved as a natural health product by Health Canada, Ageoff is a nutricosmetic – essentially, a nutritional supplement taken in pill form that has external, cosmetic effects.

“We were the first to pioneer it,” Foley says of the nutricosmetic field.

With a diploma in food technology and a bachelor of science in food sciences, Foley tracked the work of doctors all over the world to develop Ageoff, which he says addresses the main reasons the body ages: DNA damage, loss of lean body tissue, and loss of the health and elasticity of the skin. The three main components of the supplement, all plant extracts, include a bark extract from the Amazon Rain Forest that Foley says repairs DNA damage; a coleus root grown in India that reduces body fat levels and increases firmness; and a deep red micro-algae found in Hawaii that functions as an anti-oxidant to reduce wrinkles.

Foley says feedback from customer testimonials correspond to studies carried out by the doctors who researched the three main ingredients Foley uses in Ageoff, and that certain results often occur incrementally, after the product has been used for a specific amount of time.

Even so, Foley admits that healthy living is 90 percent diet, exercise and genetics.

“There is no such thing as a magic pill.”

And how does Foley respond to those who say an anti-aging pill is a whole lot of hogwash?

“Most people are skeptical,” Foley admits.

But North Americans are slowly learning that what we put in our bodies makes a difference, he says, and also that nutrients extracted from plants have an effect on our bodies.

Foley was inspired by his mother to get into the health and wellness field. They used to work out together, he says, and she always taught him, ‘You are what you eat.’

Foley says the film, An Inconvenient Truth, a documentary about global warming, inspired him to think more about health prevention.

A brush with death also helped him find what he calls his higher purpose.

In September 2001 Foley was staying across the street from the World Trade Centre, on business at the time.

“I was walking towards the Trade building when the first one was falling,” he says.

“I was literally running for my life.”

That experience was an eye opener for him, he says, one that helped him realize he wanted to do something that would make a difference.

But he says he thought he was too young to go out on his own at the time, so he worked for six years after that for other companies heading up R & D initiatives and developing formulations for products like sports nutrition bars.

So far, the journey with the five NuvoCare products he’s developed has been one of trial and error.

He started on The Shopping Channel and stayed there for two years – but it’s not a sustainable business model, Foley says.

At the moment, he’s focused on selling his products in independent health food stores like Healthy Planet at Sheppard Avenue and Bathurst Street and Ambrosia Natural Foods near Yonge and Steeles.

Even though she now lives in Halifax, Foley’s inspiration, his mother, works for the company in a sales capacity.

“I couldn’t be happier to have her involved.” 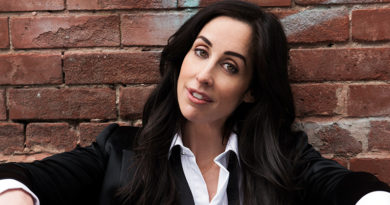