You’ve got to replenish the protein lost during training, he says, so drink the shake within an hour.

George is all smiles, and as cute as that grin is it’s impossible not to eyeball his muscles, which instead of rippling, stand straight up — or out — rock-hard and seemingly immovable.

And there’s the paradox of the new Upper Village business known as PowerClub: the rock-hard trainers — at least one of which has taught hand-to-hand combat to soldiers and anti-terrorist units in Israel — versus the softness of George’s smile; and the concrete-treated floors versus the girly crystal-like chandeliers dripping over them.

Then there’s the well-known philanthropic pursuits of Bronfman herself and the fact that the petite Forest Hill mother of three could easily flip you over her shoulder or snap your arm like a toothpick.

Open about seven months ago on Eglinton Ave. West near the Allen, PowerClub offers personal training as well as boxing, various martial arts techniques, and more specialized training like a self-defence technique known as Kraz Maga (the latter of which Bronfman dubs a sophisticated way of disarming someone with a gun or a knife) — all on a one-on-one basis.

The majority of folks are coming in for the personal training, Bronfman says, but needs and situations are diverse. A 78-year- old woman with osteoporosis is boxing and begging for a tougher workout. A couple formerly overweight teens are now hard bodies.

After training with Judo and Sambo champion Erez Cohen, Bronfman says she lost 20 pounds and came up with the idea of opening an elite club that could help people achieve their goals.

Cohen was on his way back to Israel, where he’s run what Bronfman says is one of the largest gyms there, but when she asked him to stay, he did. He’s now her business partner and heads up a team of six personal trainers.

She wanted to develop something more than a monster club, she says.

There’s no membership fee, just the cost of the training session, which runs around $95 an hour.

The place is so exclusive you don’t even go through the front door street entrance, but rather through a back door that opens to the alley at the rear of building.

Inside the multi-level space, individual rooms divided into different levels add to that boutique vibe. A lounge with rolling chairs and a gas fireplace leads up the stairs to the training area, a long room with mirrored walls and frosted windows that lead up another set of stairs to the Dojo room.

Replete with mats, hanging bags, pulleys and bars for boxing and martial arts training, this is a room you can’t graduate to until your trainer says you’re strong enough, Bronfman says. She hangs out there — literally, from a ladder-like bar suspended horizontal to the floor that she pulls herself along. Not too many women can cross the bar like this, she says.

There’s also a lower level stretching room, an upper floor with a kitchen and massage room, and a rooftop patio.

Once people take a training session, any doubts they may have about the concept melt away, she says.

Knowing what Mixed Martial Arts (or MMA) is all about also helps.

“MMA is more civil than boxing,” Bronfman says, because with boxing you keep on going until the person blacks out.

But with MMA, the whole idea is to submit.

Unfortunately most of the trainers aren’t in the day George is making his shake. Not that they’re lollygagging on a beach after the recent long-weekend. Instead they’re training hard-core in the United States, says Bronfman, as they can’t find training that’s up to their level here.

Bronfman trains twice a week but will soon be ramping it up to her former four times a week training schedule. It’s not like she’s slacking either. Between managing the club, raising the kids, and working with various causes, she’s also finding time to pull herself along that hanging ceiling bar.

“I get up at three-thirty in the morning to work,” she says. “I’ve got a lot going on.”

Future in training working out for fitness buffs 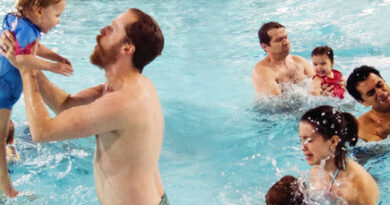