The Pumps, as it is called by locals, is part gas station, part southern barbecue restaurant and part general store complete with everything from confectionery to beer pong supplies. When the kitchen closes for the night, the 24-hour spot starts serving curry.

Judson, a chef with experience at fine-dining establishments like Oliver & Bonacini Café & Grill, had planned on opening his own midtown restaurant, but the lease didn’t pan out. While stopping by Beltsos Service Centre at Queen Street E. and Carlaw Avenue, the mechanic shop his family frequented for years, he learned the former Country Style space next door was available for lease.

“That evening I was smoking a brisket and I went on the Internet looking for a new recipe and I stumbled upon a place called Oklahoma Joe’s, which was a barbecue joint in a gas station down in the south,” he says. “I started thinking, ‘Wait, I’m looking at a gas station right now and nobody’s done this in Canada and I really enjoy barbecue.’ When I was doing fine dining I’d come home and I’d have a great brisket or a pulled pork sandwich, that was always sort of my closet hobby if you will.”

Although they completely transformed the space, it pays tribute to the original gas station, which dates back to 1957, with old photographs and newspaper clippings. The Pumps, which also offers group catering, has its own rooftop herb and spice garden and they sprout their own sprouts on site.

“People have this vision of gas stations being dirty, seedy places,” Greg says. “The Shell station, the Esso, they have a Tim Hortons in it and there’s nothing wrong with that but we’re just doing something different and we wanted to create a culture in Toronto in an area where people are really looking to support local.”

Inspired by childhood trips up north, they wanted the storefront to have an old school country and cottage feel, which they hope makes people feel like they’ve escaped the city.

“Everyone’s in the grind, everyone’s working hard and everyone knows Toronto the big smoke, people are stressed, people are running around so when you walk down Queen Street and you see a big barn wood front and you go, ‘What’s that?’ For two seconds of the day it takes you away,” Greg says.

“That’s why we put the Muskoka chairs out front so people can come sit down and relax and it takes them out of their daily grind for five minutes where they feel like they’re in the country,” adds Judson. 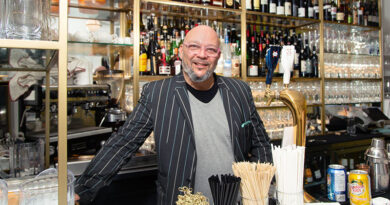