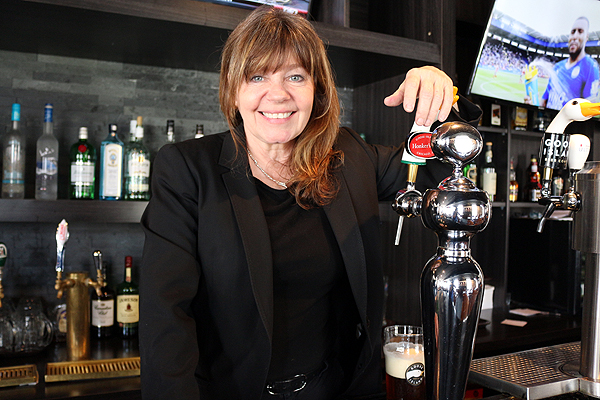 BRIAN BAKER/TOWN CRIER CORNERSTONE OF THE COMMUNITY: After almost 30 years of serving ales and platters to the Davisville community, Debra DeMonte made the tough decision to sell her tavern, the Longest Yard.
Business
April 30, 2016July 29, 2017 Brian Baker Debra DeMonte, The Longest Yard

That’s the sentiment of Davisville tavern owner, Debra DeMonte, and the description she shared of The Longest Yard’s role in the neighbourhood.

Which explains why shutting the doors to the establishment, opened by DeMonte when she was 24, is such tough business decision.

She rattled off several big moments in history where Davisvillers and Leasiders alike set foot across the threshold, including 9-11, the Blue Jays’ back-to-back World Series titles, Canada’s hockey gold at the Vancouver-Whistler Olympic games, and Barack Obama’s first inauguration as president of the United States of America.

Though DeMonte will keep her other Longest Yard open — at 3313 Bloor Street West in the Kingsway — she’s been told the Mount Pleasant address should be the one staying open.

The reason behind the pub’s end is purely a lifestyle change.

“It is a really tough business. You’re open seven days a week, 15 hours a day,” she said. “I want to slow down a bit…. I have not had a day off or a vacation in years.”

After making the announcement on Facebook, DeMonte received calls, emails and protests from around the globe.

“I’ve had people really protest with me, ‘You’re selling the wrong restaurant’,” she said. “A lot of people are sad, but happy. They’re thankful.”

Gone will be the bi-annual tradition of Lobster Fest, where the Yard — as it’s more affectionately known by patrons — and the all-day breakfasts on weekends and holidays.

But DeMonte assured the new restaurateur, John Oakes of the Harbord House, will put his own stamp on the property.

The new name will be the Belsize Public House, a far cry from the sporty origins that conjure up images of Burt Reynolds and his moustache.

When asked if she was a fan of Burt Reynolds she admitted now she is.

“He’s so gracious,” she said, while sharing anecdotes about the Burt’s multiple visits.

“Back in the early ’90s there was a high-end restaurant on the street called Pronto, and it was the place where the who’s who would go,” she recalled. “The staff would come in here after for drinks, and they said, ‘Deb, Burt and Lonnie are coming in here, why don’t you come in and see him.’

The end result was the signed headshot of the ’70s A-lister who starred in the film where the bar got its name.

Milestone for The Longest Yard