Section between Lawrence and Wilson could be dubbed Upper Avenue

The shopping strip along Avenue Road between Lawrence and Wilson is definitely something, but what exactly?

That may change soon following a motion passed at a recent city council session. The money’s now in the bank, all $14,000 of it, to re-brand this strip “The Upper Avenue” by adding the name to the street signs here.

A community consultation arm working on the Avenue Road Avenue Study, which began back in 2007, spearheaded the project.

“The group said that Corso Italia has signs, Little Italy has signs, it would be cool if we could have this Upper Avenue branding. That was recommended in the adoption of the planning study,” said Christian Ventresca of the planning department.

Designs are currently being short-listed and should be installed at about 30 intersections by year’s end, said Allen Pinkerton of Transportation Services.

The capital for the project has come from a neighbourhood beautification fee paid to the city by a local developer. The money was originally slated for the renovation of the Armour Heights Community Centre, but when the feds and the province stepped in with cash for that project, that left a surplus.

After the Upper Avenue signs are installed and the community centre is brought back up to snuff, the new Upper Avenue could see even more love.

“If the renovations to Armour Heights proceed and then there are additional funds from this development available then they would go toward implementing small streetscape improvements along this stretch. Things like street furniture, planters and those sorts of things. There’s a small little park there too that could be upgraded with new benches,” Ventresca said.

The purpose of re-branding the strip, said Ventresca, is to “try to unify the street sign treatment along the commercial strip,” but it may end up unifying more than just the signage.

“If it’s called Upper Avenue it will give us an identity and something that’s going to draw us all together, which would be great,” said Erin Paterson, co-owner of Periwinkle Flowers. “People like to know where they’re going. They like to say, ‘I’m going to the Beaches,’ or ‘I’m going to Greektown, or Chinatown.’ “

Paterson and her business partner have been running the flower shop here for more than nine years.

Ohayon, who’s art shop is just down the street, is a little less enthused.

“Calling it whatever doesn’t make it become what you want it to be,” said Ohayon, who’s owned his shop here for more than 20 years. “When you say Avenue and Lawrence it’s clearer. I think it’s too early to call it the Upper Avenue.”

Ohayon says that this latest re-branding is an apt reflection of a changing neighbourhood.

“(Some) are making it into the new Rosedale or whatever. It’s changed in terms socio-psycho-economic things, I guess,” Ohayon said.

And although he admits he’ll likely use the term Upper Avenue one day himself, he says it won’t change much for his business.

“It won’t make me successful or not.” 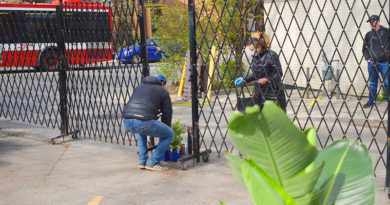