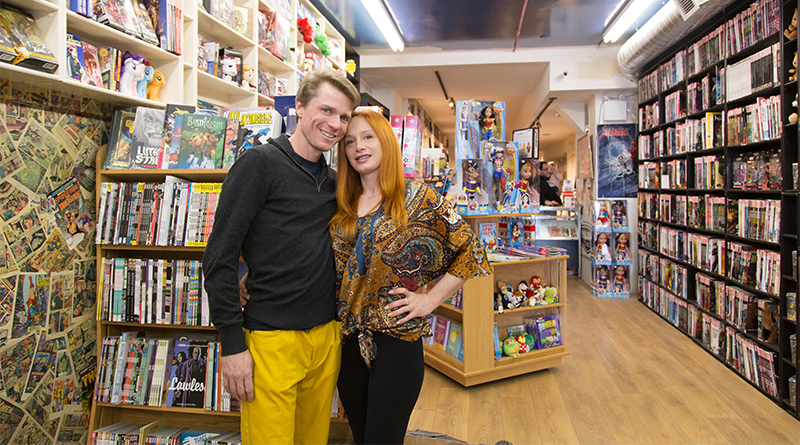 Peter Dixon wants midtowners to know Paradise Comics is more of a bookstore with a comic book theme, rather than just a comic book store.

The Bedford Park hobby shop has expanded its original 600-square-foot shop (13-feet wide and 55-feet deep) to about 1,400 square feet.

What was the impetus to Hulk-smash the back wall and move the space further to the laneway?

“I have an addiction. I keep buying comic books and I have no more room,” Dixon said recently. “I had two storage lockers of books and whatever else. I have original art in the basement that wasn’t getting displayed.”

Ideally, he would have quadrupled his space, but that wasn’t possible, so he doubled the space to display a lot more.

The basement wasn’t all that large a space either. On top of that, he wanted to move out of the more traditional bin-diving formula and turn it into a bookstore.

The running joke for the project was that it was planned for nine months, but took two years to complete. Now the cosmetic touch-ups, helmed by Dixon’s wife, Kristina Teixeira.

“Every week we’re doing something new. It’s still a working business and it’s still on the go,” Dixon said. “But getting the structure up and the interior up, was the biggest hurdle.”

They now have a faux brick wall in the front where all that original art can see the light of day. Along with the art, the store has grown to stock children’s books, as Dixon and Teixeira are the happy parents of a 21-month-old daughter, stuffies and superhero socks.

Those socks are apparently all the rage with non-traditional comic goers. The store has increased its sales 100 percent, and for a comic book fan who has seen the ebb and flow of popularity since 1994, it’s a relief.

“A lot of stores haven’t survived. I started in ’94 where a bunch of stores was going out of business. Things got good in the early 2000s, and then it slowed down.”

Next on the agenda will be a fundraiser to remember the lives of two close comic book mainstays, Darwin Cook and Brendan Yap, on Apr. 21, as well as a 25th-anniversary party slated for September.