The Old Manse in York Mills was once a place of inspiration for one of Canada’s most prolific artists, C.W. Jefferys.

But to his granddaughters, Nancy Baines and Barbara Kerslake, it was simply their beloved childhood home.

And so it was with mixed emotions that the women recently put the historic red brick, located on Yonge Street, north of York Mills Road, on the market.

The decision to sell was precipitated by the Oct. 2010 death of their mother, Elizabeth Fee, who lived in the 19th century home all her life.

In December, the 1845-built home was purchased by Toronto resident Amir Mousavi for $1.2 million.

Nestled between an office mid-rise and a commercial complex, the two-storey red brick remains one of a few standing testaments to North York’s early history, and the group of high-profile artists who at one time populated the area.

“It was a wonderful place to grow up in,” said Baines, seated in the living room with Kerslake on a cold December day. “You wouldn’t believe there was a real village here. It was fun — we had a very nice childhood, we were very lucky.”

Their mother, one of Jefferys’ five daughters, was born just a few years after the painter and his wife Callie began renting the home as a summer cottage.

“There was an artist’s club in the valley and they used to come here to paint,” says Baines, 68.

Jefferys, who is known for his artistic depictions of early Canadian life, fell in the love with the area, and he purchased the home in 1922. Other contemporaries of Jefferys lived nearby, including sculptor Emmanuel Hahn and Walter Allward, who designed the Vimy memorial in France.

As youngsters, Baines and Kerslake bore witness to the tremendous change from the Village of York Mills to the busy commercial and office area of North York it is today. Kerslake, 72, remembers when it was all farmland. She says she can remember almost being hit by a trolley bus that traveled Yonge Street between Glen Echo Road — the city limits at the time — and Union Station.

Though Elizabeth was the home’s longest occupant, several early inhabitants of York Mills lived there prior to the Jefferys clan. Kerslake says it was once a doctor’s house, and the manse of a local Presbyterian church minister.

In 1941, Elizabeth and her husband George A. Lee bought the home from her father.

By the time Baines and Kerslake were born, Callie had already passed away, and Jefferys was quite elderly. The sisters, Jefferys, their parents and another sister Judy, who later died in a car accident, continued to live there together.

Baines and Kerslake both remember Jefferys at work in the studio Callie had built for him on the property.

“I remember the oil painting and the smell of the turpentine and the bits and pieces of tubes of paints that were sort of left around,” Baines recalled.

The studio also had a bed in the room, Kerslake said, as Jefferys would sometimes work late into the night.

“It was a beautiful studio, it had a huge north window that gave lots of light so he had good northern light which is apparently very good for artists,” Kerslake said.

In 1956, five years after Jefferys died, the studio was demolished to make way for a widening Yonge Street. In the process, the house itself was physically moved six metres north and 18 metres east. At the time, there were about 25 similar homes in the area, but the city expropriated and demolished most of them.

Elizabeth refused to give up her family home, and a legal battle ensued. Finally, the city and the family agreed to move the house.

“They had to jack up the house and put the beams underneath and eventually they had a huge winch tied I guess to one of the trees in the back and then they pulled the house back,” Kerslake recalled.

Though Jefferys is remembered as a prolific illustrator for newspapers in New York and Toronto, and for his highly regarded three-volume Picture Gallery of Canadian History, it was at times difficult to earn a decent living, his granddaughters say. The family often lived hand to mouth, Baines said, and the home itself didn’t have running water for many years.

“It was pretty primitive, and I think when my grandfather sold some work then they would put some money into the house, but they didn’t have a lot of money to make it very luxurious,” Baines said.

The home, originally Georgian cottage-style, underwent renovations and additions, including a new kitchen after the 1956 move. In 1992 it received a historical designation, which protects the façade from being altered or demolished.

Though they can be altered, the historical interior features of the home are plentiful, including pine floors underneath light-coloured oak, two fireplaces, cedar closets and a stairwell supported by what a 1992 heritage structure report called an “exceptionally fine and lightly proportioned balustrade”. The front doorcase, with a high frieze and projecting cornice, was designed by Jefferys himself.

Homebuyer Amir Mousavi says he has no intention of making any sweeping changes to the interior of the house.

Mousavi, who works in corporate finance, says instead he intends to maintain and showcase the historic features of the home.

“I was surprised to see it come on the market, and it was a unique opportunity so I went for it,” he said in a phone interview.

Mousavi said he has yet to decide whether he or family members will reside in the home. He is set to take possession of the house in April.

“We’re going to take it step by step,” he said of the move.

As for Baines and Kerslake, they are beginning the task of sorting through items in the home, and divvying up paintings among family. Some, like “The Caribou trail” hanging in the living room, are by Jefferys, others by his artist friends.

Though they are saddened the home will no longer be in the family, Kerslake and Baines say they are grateful their mother was able to do as she had wished, which was pass away peacefully in the home she cherished.

“She loved this house and all the memories of her family were here,” Baines said. 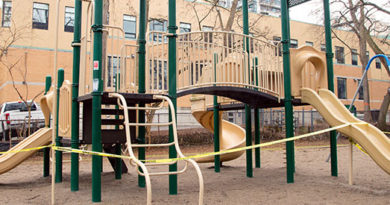