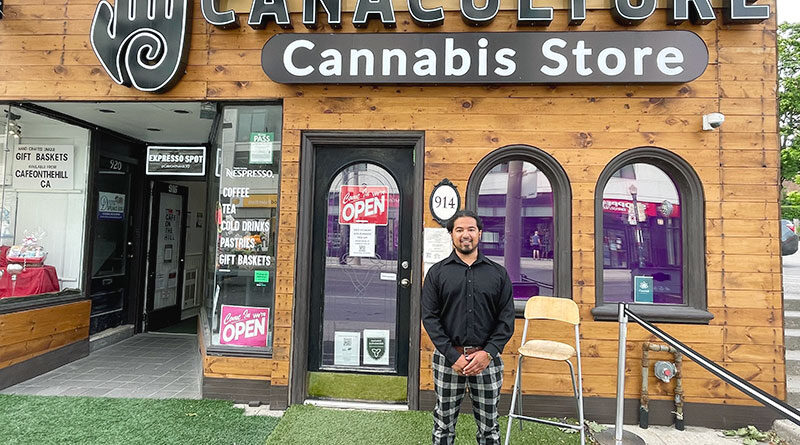 Although it has faced challenges because of COVID-19, the cannabis industry is still going strong in midtown Toronto. Patrons and owners of dispensaries are happy things have finally begun to reopen for in-store shopping and are optimistic about the future of cannabis culture.

The store is particularly excited about reopening for in-store service as it only began business in April of this year and so far has only been available for curbside pick-up because of the shutdown.

COVID hindered business a bit, she says, because “a lot of people do want to come inside.” Also, Belle’s menu has only been accessible online and this “doesn’t really work for everyone.”

As far as the future of the culture, she said people will definitely be thinking twice about sharing joints.

One trend Tripodi finds interesting is that more people, especially the older clientele, are experimenting with cannabidiol (CBD).

“People are using it as more of a pain relief because it doesn’t get you high,” which some people prefer, she says.

Over at Hi Class Cannabis on Eglinton Avenue West in Forest Hill, the dispensary has found the pandemic has helped business, says general manager Hillary Field.

This has resulted in the shop selling many more smaller, pre-packaged pre-rolls.

“People feel that they can hold them as opposed to passing a joint” while still enjoying marijuana in a social setting, she says.

The shop has also seen a noticeable rise in the purchase of edibles, which Field thinks “is because of discreetness, as a lot of people are home with their kids.”

Also, some people have expressed concern for possible negative effects on their lungs if they contract the virus.

Up Eglinton just west of Bathurst Street, CanaCulture Cannabis Store has developed its clientele very quickly despite the pandemic, says Zain Jaffery, who owns the dispensary with his brother Samir.

The store has done particularly well with edibles, considered by some people a great alternative to smoking.

Jaffery enjoys being “embedded in the culture” of cannabis.

“One thing I love about cannabis is that it doesn’t discriminate,” he says. “We have customers of every age, every race, every gender and we can all relate because of our love for cannabis and the culture.”

He is optimistic COVID won’t affect the culture of cannabis in the future and as more people are vaccinated they will once again begin to feel more comfortable sharing a joint in the future.

People not being able to travel this past winter actually helped cannabis sales, says Josh Satok, assistant manager at Yerba Buena Cannabis on Bayview Avenue in Leaside, an affluent neighbourhood whose residents usually go on vacation during the winter.

“People are certainly grateful that we’ve remained open,” he says.

Many have been using cannabis to help them cope with trouble sleeping and with anxiety due to the pandemic, which he calls a “nice barrier in between opioids and big pharmas.”

When the dispensary opened in October, 2020, its owners “spent all this time and effort to create a cozy and inviting atmosphere, only to have to close the doors,” so they are very excited about re-opening for in-store service.

Although there’ll be a lot less communal joint sharing for the next few years at least, the friendly culture of cannabis will remain the same, Satok says.

A few doors up the street on Bayview, Canna Cabana Cannabis Dispensary’s assistant manager Santiago Hernandez “couldn’t be happier to welcome people back into the store.”

Although the pandemic has “really hindered the in-person conversation part” of the cannabis business, he also feels that in some ways, it has “really helped the industry because it’s shown the adaptability we have,” Hernandez says.

As the stress from COVID has caused anxiety for many customers, Hernandez says the dispensary is glad to be able to play such a big part in the relaxation that people are yearning for and help them “make it through this tough time.”

With more people seeing the benefits of cannabis, Hernandez is hopeful the stigma surrounding marijuana use will finally come to an end.

He is confident the cannabis culture will go back to normal after COVID ends because, after all, cannabis is “nothing but the feeling of love and community.”