A gunpoint robbery victim in Glen Park lost both his money and his vehicle.

Police say just after midnight on May 23, the victim had just parked his car near Marlee and Glencairn avenues, when two men approached him. One man pulled out a gun and demanded his property.

The victim handed over his cash and car keys and the suspects fled the scene north on Marlee in the victim’s vehicle. The victim was not harmed.

A woman in midtown reported she was robbed at knifepoint last month.

On May 20, the 36-year-old woman was around Eglinton and Mount Pleasant at around 8 p.m. when a man reportedly came up to her, pulled out a knife and demanded money.

The victim handed over her money, and the suspect fled the scene. The woman was not harmed.

A convenience store was also robbed at knifepoint in May.

An employee of Mac’s Convenience at 393 Eglinton Ave. E. told police that shortly after midnight on May 19 a man entered the store and approached the counter. The suspect pulled out a knife and held it to the victim’s back while demanding he open the cash register.

The victim complied, and the suspect grabbed cash out of the till, then took sunglasses from a rack before fleeing the store. The victim was not harmed. 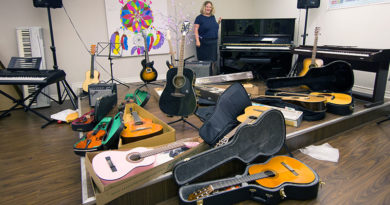