While the city is backing a proposal to introduce electronic bingo to existing bingo halls, not everyone is convinced that charities will be getting what they deserve.

However, the introduction of electronic bingo, where players use computer terminals instead of paper cards to play, could stabilize an industry that’s been in decline for over a decade, says Tony Bitonti, senior manager of media relations at Ontario Lottery and Gaming.

“We want bingo halls to survive so charities have a long-term, viable way of making money,” Bitonti said.

In Ontario, not-for-profits partner with bingo operators by providing volunteers to work in the halls in exchange for a portion of their revenue.

According to Bitonti, under the new model, of the 30 percent of money not paid out in prizes or used for marketing purposes, the city would receive three percent, Ontario Lottery and Gaming and charities would each get 25 percent (up from 23 percent), while bingo halls would get 47 percent.

But Ward 29 councillor Mary Fragedakis says that under the proposed model both the city and charities would receive less revenue than they currently do.

Fragedakis says at a recent Government Management Committee meeting, she heard deputants giving different numbers for what charities receive from bingos ranging from 24 to 32 percent.

Fragedakis wants 30 percent instead of the proposed 25 percent for charities.

“The charities do important work, we should do better for them,” said Fragedakis.

Groups, such as Hellenic Home for the Aged, rely on the revenue they receive from bingo halls and are happy about the prospect of additional funds.

“I think any funding toward charitable causes … would enhance current programs and develop new programs,” said CEO of Hellenic Home for the Aged, Kosta Kostouros.

The home uses charity funds to provide services like transportation to their residents for doctor’s appointments, shopping, and excursions around the city. 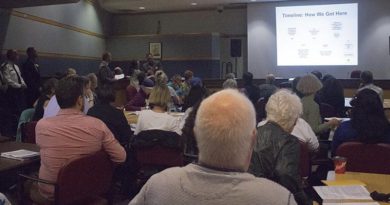