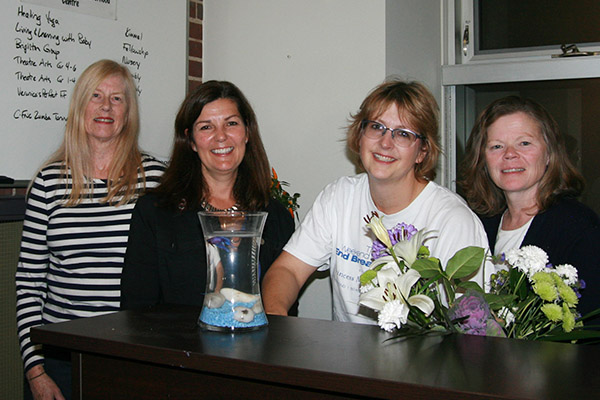 It’s a warm November evening, and 12 young people, some with special needs, are descending into the basement of Fairlawn Avenue United Church for a Zumba class led by instructor Marija Bojic.

“Left! Right! From the side! Go!” the energetic Bojic shouts, as she and her sweatpants-clad followers, led by Fairlawn Neighbourhood Centre director Naomi Schafler, dance, clap, kick, and move their arms and hips to a percussive electronic beat.

The “Zumba Special is one of more than 50 fitness classes offered each season by the Fairlawn Neighbourhood Centre.

However, its future may be in jeopardy following a recent announcement that, after 18 years, the centre is suspending its current operations on Dec. 31.

“Over the years we’ve been an employer for local instructors, a hub for volunteerism, a stage for teens interested in drama, and a showcase for dining establishments in the Yonge Lawrence Village,” says Schafler, a neighbourhood resident who has served as the centre’s director for six years. “These kind of programs and services were barely existent when the centre started.”

“It led the way in building up this community,” she continues. “We’re sad to see it close.”

The decision to suspend the Neighbourhood Centre’s operations was not an easy one, nor expected, Board of Directors chair Laura Nield says, though registrations for the Centre’s children’s programs had been declining for the past two years, and staff had prepared for the introduction of full-day kindergarten by creating new daytime programs for stay-at-home parents, retirees, and youth and young adults with special needs.

“We thought we had weathered the storm,”” Nield says, noting a daytime bridge program had proven especially popular. “Things were kind of chugging along, and then we were very surprised by the significant drop-off in registration this fall.”

Even popular adult programs such as fitness and pre-natal health classes weren’t immune to the overall decline in enrollment, Nield says.

“There are all kinds of small fitness and yoga studios that have cropped up in the last few years that are offering similar types of programming to the stuff that we’re offering here,” she says.

Alternate options were considered — fundraising, more cost-cutting — but in the end, none would have solved the problem, Nield says.

“At the end of the day, we felt that this was the only responsible decision that we could make, because otherwise we would have been facing insolvency,” she says.

The Neighbourhood Centre was begun in 1997 by Fairlawn Avenue United Church, Schafler says, and while its programs and administrators were located there, it has long been run as a separate, non-denominational entity from the church, with an emphasis on serving the community.

Programs officially run by Fairlawn Avenue United Church, along with Fairlawn Pre-School, which operates from the same location, are unaffected by the Neighbourhood Centre’s closure.

That hasn’t prevented other members of Fairlawn Avenue’s congregation, many of whom sit on the Centre’s board, from reacting in shock or despair at the centre’s closure, board member and Fairlawn Avenue congregant Bonita Kersey says.

“The centre was very welcoming,” Kersey says. “All of the mothers, the nannies, the grannies, coming in to get the kids, the old people doing their exercise classes and groaning as they came up the stairs…. And so many different programs — I did regular yoga classes, I did ‘making your own sushi’. That it was my home away from home.”

Front desk supervisor Barb Morris, whose own children participated in the Centre’s creative play and drama programs when they were younger, agrees with Kersey.

“Sometimes we’d get newcomers strolling in off the street. They’d say, ‘I just moved into the neighbourhood,’ and we’d provide lots of information,” Morris says. “It had a real community feel to it that I think is going to be missed.”

In recent years, the centre had also run programs for the neighbourhood’s growing caregiver population, many of whom are from the Philippines, including a fundraising brunch after Typhoon Nesat struck the country in 2011.

Another highlight was the centre’s partnership with the Yonge Lawrence Village BIA, which supported an annual restaurant-showcasing fundraiser, some of them with James Bond-themed titles like Live and Let Dine and Dine Another Day.

Schafler hopes that at least two programs, the Saturday morning MultiWorks and Zumba Special, which cater to families of young adults with special needs, can continue to the end of June 2016.

For her part, Nield hopes the suspension is a temporary one, framing it as a period of “transition,” during which she hopes the board will be able to re-invent the centre and return with a different structure.

“We’re embarking on a research and revision project to determine what the need is in the community, and if we can meet that need,” Nield says. “We don’t know all of the answers yet, but we are hopeful that we will be able to come back in some capacity.”