“There will be a byelection very soon, and we will win it, decisively in the name of, and in the memory of, Jack Layton,” Scott said to a cheering crowd who nominated him at the Metropolitan Community Church of Toronto Jan. 9.

Scott beat out two other candidates, Claire Prashaw, Layton’s former constituency assistant, and Justin Duncan, a lawyer and environmental activist, to replace Layton, who passed away in August after a battle with cancer. Layton served the riding as MP for seven years and as party leader took the federal New Democrats to historic heights during the May 2 federal election.

“I’m ready to roll up my sleeves and do this work,” Scott said in his speech earlier in the evening.

Layton’s memory permeated almost every aspect of the two-hour nomination meeting, attended by hundreds of local NDP voters, and a plethora of local and national politicians. The evening began with a video montage tribute to Layton.

In his victory speech, Scott said no one could replace Layton.

“I will do my very, very best to follow in his footsteps, to do honour to his memory, and I hope to do you all proud,” he said.

In her speech, Layton’s widow, Trinity–Spadina MP Olivia Chow had one message for Prime Minister Stephen Harper: “We are ready for the byelection, bring it on.”

Harper has until the end of February to call a byelection in Toronto–Danforth. The Liberal and Conservative parties have yet to schedule nomination meetings to choose their respective candidates.

DiNovo's back for another term

The doctor wants in for NDP 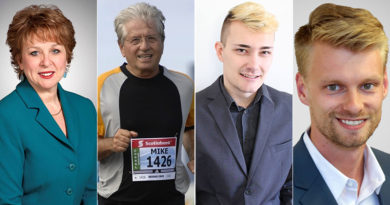