Cheri DiNovo held on to her riding of Parkdale–High Park for the NDP.

“I’m so thankful for all the people of Parkdale–High Park who voted with their hearts and for a better Ontario,” DiNovo told a rowdy crowd of supporters at Parkdale hot spot the Cadillac Lounge, located at Queen Street West and Dufferin.

DiNovo said she plans to take the initiatives (she established) further over her next term at Queen’s Park.

One issue that’s at her top of her list is the proposed rail route from Union Station to Pearson International Airport being introduced by Metrolinx for the 2015 PanAm Games. The line runs right through the riding and DiNovo’s been campaigning to get electric trains on the line rather than diesel.

A long-time area resident, DiNovo has long spoken out for the marginalized residents of Parkdale.

Her party’s stance on poverty is what won Martin Awdur’s vote, who was outside the bar hawking t-shirts emblazoned with the slogan, “Where is the f****** gravy?”

“The NDP has a much better track record on poverty issues,” said Awdur. “The Liberals will campaign on the left and govern from the right. And I prefer to stay on the left side.”

DiNovo has held the post since 2006, after winning the riding during a byelection to replace Liberal Gerard Kennedy, who went on to hold the riding federally but lost it in May to Peggy Nash.

Meanwhile, the atmosphere was more subdued at the Yellow Griffin Pub at Runnymede and Bloor Street West, where Liberal supporters absorbed the defeat.

Ex-MPP Kennedy knew that his candidate was in trouble from the first returns and shortly before 10 p.m., Pasternak was trailing by 900 votes.

“That can’t be overcome,” Kennedy remarked. “But it’s been a very close race.”

Kennedy pointed out that the odds of a political newcomer taking out an incumbent are not good.

“I’m not surprised … Incumbency is a big benefit,” Kennedy said, while adding that he didn’t consider DiNovo’s win a runaway victory considering that the Liberals secured the right to form a government.

“The candidate and the volunteers should feel very proud. They ran a positive campaign,” Kennedy said. 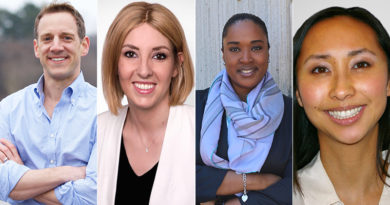 Hoskins’s old riding up for grabs, but party change not expected

Glen Murray has no trouble in Toronto Centre

The price of democracy