Councillors got an earful from residents, businesses and community groups who came out to speak on the city’s budget at North York Civic Centre.

He mistakenly introduced Margaret Watson from the Canadian Pensioners’ Concern as being a deputant about prisoners’ issues. He made a joke of it by saying he needed glasses and playfully referred to former budget chief Councillor Shelley Carroll as “the warden”.

For her part, Watson gave a feisty presentation about preserving services.

“Many seniors are tenants who receive pressure from landlords. We are disappointed you have cut $100,000 from the tenant defence fund,” she said at the Jan. 19 public meeting. “We hope council doesn’t want to put more tenants at risk of homelessness.”

She also expressed concern about the TTC’s proposal to reduce service on 48 bus routes and how an across the board user fees increase will hurt seniors, children and families.

“We are our brothers’ keepers,” she said.

Councillor Ford asked if she was open to funding from the private sector for naming rates or sponsorship? She replied it depended on how much control businesses would have over how the money would be spent.

“We voted for council. We didn’t vote for Walmart,” she said to applause from the 100 or so people in attendance.

Shouts of “you go girl” and “way to go Margaret” rang through the North York council chamber.

She was one of 35 individuals or groups who signed up to speak to the budget subcommittee. Four sessions were held in North York, East York, Scarborough and Etobicoke-York. The East York session held the same evening, Jan. 19, attracted over 60 speakers and ran until nearly 1 a.m.

Councillor Denzil Minnan-Wong asked one deputant – John Cartwright, president of Toronto and York Region Labour Council, for his solution for balancing the budget?

“What services would you cut and what taxes would you raise so income meets expenses?” Minnan-Wong asked.

“There was no mention of a tax freeze in the election. We don’t support a tax freeze,” answered Cartwright, husband of Councillor Paula Fletcher. “There should be a modest tax increase of two percent.”

Councillor Ford made a point of reaching out to most deputants with a kind comment including telling Cartwright his wife Fletcher was one of the councillor’s favourite colleagues.

This drew laughs because Ford is right wing and Fletcher is on the left.

But not everyone was advocating for tax increases or cancelling service cuts.

Carol Wilding CEO of the Toronto Board of Trade had mostly praise for the proposed $10.63 billion operating and $2.049 billion capital budgets.

“Businesses taxes are being frozen for the first time since 2003,” adding that there’s broad based support for this budget among her members. “You have to balance your budget full stop. You can’t spend what you don’t have.”

The city has no more public meeting scheduled before city council approves the budget on Feb. 23-28. But several politicians are holding their own public budget sessions. Because there was no downtown session: councillors Kristyn Wong-Tam, Pam McConnell and Adam Vaughan are hosting one at city hall inside the council chambers on Jan. 22 from 2-4 p.m. 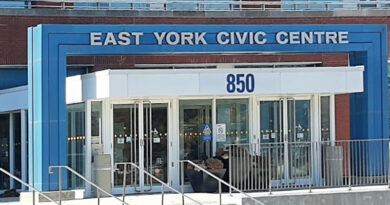