Bruna Amabile is concerned the TTC plans to force her parents Danny and Grace Calia to leave their home at 247 Strathmore Boulevard.

The transit commission is planning to build a pair of emergency exits on Strathmore for the Donlands and Greenwood stations and this involves tearing down four houses.

One of those homes is at 247 Strathmore.

“My parents have lived in this house for 51 years, before a subway was even built in the area,” said Amabile, who lives on Strathmore two doors from her parents. “I’d like to believe (TTC) will seriously consider alternatives put forth by the community.”

Ironically, Amabile’s father was a TTC employee for 35 years.

The family has contacted a lawyer to review their options.

But TTC spokesperson Brad Ross says the commission is also presenting other options that will discussed at a community meeting on the matter being held tonight.

“The government always negotiates with residents on market value. Expropriation is the last resort,” he said, adding a community meeting being held tonight will address the alternatives. “ We will look at all options , costs and construction.”

After tonight’s meeting, the issue will go to a vote at Wednesday’s TTC meeting. It would then go to the August 12 government management committee and city council August 25-26.

But the matter is rushing ahead too quickly, said Strathmore resident Lisa Dymond.

“We were notified by form letter June 16 for everyone on the block and then a follow-up letter a few days later there was a letter for houses likely to be expropriated,” she said.

Now the issue is scheduled for a vote July 14, less than a month later, she said.

She said affected residents are focused on three things: usage, design and location.

Donlands is the seventh or eighth least used station in Toronto, she said. Putting it on Danforth Avenue makes more sense and could attract more riders to businesses along the strip, said Dymond.

Steve Martin, representing a group of affected Strathmore residents near Greenwood station, said he only received TTC documents regarding this matter last Thursday in preparation for tonight’s meeting.

“It took the TTC more than a week to assemble the documents but I have three days to review documents,” he said.

Besides looking at alternative locations for the second Greenwood exit, Martin wants the issue delayed for 30 days.

“I’m hopeful the (July 14) TTC meeting will be pushed back to August, September or four years from now. We need time to review documentation,” he said. “I’m not convinced the process has been well-managed.”

As well, several other Strathmore properties could be partially expropriated giving the TTC access to the lawns indefinitely. 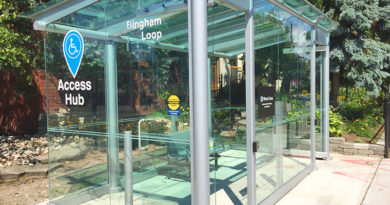