Liberal David Zimmer cruised to victory in Willowdale, securing his third term as the area’s MPP.

Zimmer was declared the winner shortly before 10:30 p.m. The lively crowd at St. Louis Bar and Grill greeted Zimmer with cheers as he entered the room, which was painted with a sea of volunteers wearing red “Vote Zimmer” shirts.

“I get to win the seat, but you put me here, so thank you,” he said to thundering applause.

The incumbent was re-elected with 51 percent of the vote, defeating his closest rival, Progressive Conservative candidate Vince Agovino, by 19 points.

Zimmer attributed his success to a strong constituency office that continuously works to build bridges within the community.

“We’ve run a really, really first class constituency office here,” said Zimmer after his speech. “I find that the secret to holding on to the local riding is to do politics locally.”

“I always felt the Liberals would be either majority or minority,” he said. “The vote for the (Progressive Conservatives) was too spread out.”

“He seemed to be a very mean-spirited person,” Levine said.

At Agovino’s post-election party, the crowd was subdued and visibly disappointed.

“It would have been nice to see a (Progressive Conservative) majority,” said supporter Bob Timinsti. “I was expecting a lot more.”

Timinsti said the province is in financial ruin and the Progressive Conservative party was the only solution.

“So much has happened with Ontario, they’re just bankrupt,” he asserted. “We’re the only province that has more debt than all the others combined … that’s absolutely sickening.”

Agovino arrived at Zimmer’s party to congratulate him and said he’s glad to live in a democracy where people can choose their leaders.

Back at his own event at Boston Pizza, near Yonge Street and Sheppard Avenue, he was pleased with how his campaign went and said he wouldn’t change anything.

“I feel proud of all the effort we put in, I have no regrets,” Agovino said. “I couldn’t have asked for a better team.”

Agovino will make a decision about running again in the future.

Zimmer is eager to return to Queen’s Park. He said one issue at the top of his agenda is working to alleviate traffic gridlock in North York by improving public transit in Toronto.

“I think the people of Willowdale … have sent a strong message that they want their politicians to sit down and cut that Gordian knot somehow,” Zimmer said. 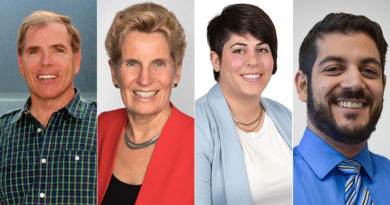