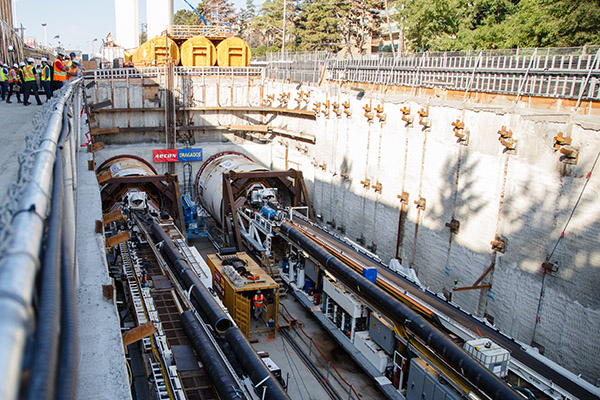 Some Leaside residents are complaining the LRT work on Eglinton Avenue has been causing more than a little noise and traffic tie-ups: it’s shaking them.

As the tunnel-boring machines and construction crews continue to make their way along the route, they’re causing vibration issues in the community, mainly the houses on Eglinton.

“There is a lot of frustration and complaints,” she said. “When you’re reading the literature it says, ‘some vibration, some noise.’ ”

Asked if she felt Metrolinx downplayed the noise and vibration, she said, “Oh god, yes.”

After speaking with a number of residents on Eglinton, it was clear she wasn’t alone. Another resident, Pam Harris, says the shaking makes relaxing near impossible.

Metrolinx representative Anne Marie Aikins said Metrolinx is apologetic, but insists their construction team was also surprised, because this is the first time while drilling on Eglinton Avenue West and East they’ve run into this issue.

“The soil conditions are such that it causes more vibration,” Aikins said. “It’s just most of the soil in Toronto is pretty sandy and so it doesn’t cause that much vibration. This area is an old area of Toronto and it just has harder soil.”

She said Metrolinx did not mean to underplay the problem with residents.

“We have been tunneling for a year and a half and we haven’t had this experience … but this area surprised us that it was causing some vibration.”

Bregar said Metrolinx is frustrating as they’re not making enough of an effort to inform people about ongoing problems.

“It’s not like you get a notice. I talked to our councillor and he said they tweet it. Well great, I am not personally on Twitter,” Bregar said. “They put it up on their website, OK, but now I have to check their website every single day.”

Aikins said she understands that with a project like this, it is going to be a disturbance for people, but the end result will be great transit.

“This is one of the largest transit infrastructure projects in the country. You can’t build that without it causing disruption for residents, we know that. We knew that getting into it,” Aikins said. “It’s going to have huge benefits at the end of it. But there will be some pain until we get to the end and you see the wonderful transit they will have in their community.”