Remember, remember, the 25th of November.

That is the date voters in Toronto Centre head to the polls in a federal byelection to elect a successor to MP Bob Rae.

The former interim Liberal leader stepped down in the summer to become a negotiator for a northern Ontario First Nations band in mining development talks with the provincial government.

Prime Minister Stephen Harper made the announcement on Oct. 20, while also naming Nov. 25 as the polling date for three other
federal byelections, one in Quebec and two in Manitoba.

In Toronto Centre, which encompasses the downtown core between Yonge Street and the Don River, as well as several neighbourhoods north of Bloor Street, including Rosedale and Summerhill, most of the candidates were lined up more than a month ago.

The incumbent Liberals and New Democratic Party, which is expected to mount a significant challenge, have opted for star power, each fielding high-profile author-journalists.

Chrystia Freeland is running for the Liberals, who have held this riding and its predecessors for the last 20 years. Linda McQuaig is carrying the NDP banner.

Freeland, originally from Alberta, has worked internationally for the Globe and Mail, where she was a weekly columnist. She is the author of two political books, the most recent being The Rise of the New Global Super-Rich and the Fall of Everyone Else.

Summerhill resident McQuaig has worked for the Globe and Mail and the Toronto Star, where she was also a columnist. She is author of several books, most recently Billionaires’ Ball: Gluttony and Hubris in an Age of Epic Inequality, coauthored with Neil Brooks.

Once the election was called, McQuaig quickly posted a challenge to Freeland via YouTube, calling for a debate on income inequality, a topic both have published books on and is expected to be pivotal in their positioning for the middle-class vote.

The Conservative Party of Canada has named lawyer Geoff Pollock, while the Green Party will be represented by former journalist John Deverell.

Other parties having announced candidates thus far are the Pirate Party, whose leader Travis McCrae is the candidate, and the
provincially registered People’s Political Party, which is fielding leader Kevin Clarke, a former homeless man with a long history of running for public office.

Clarke told the Town Crier in an August interview he believes he is a shoo-in to win.

HST a hot topic in campaign 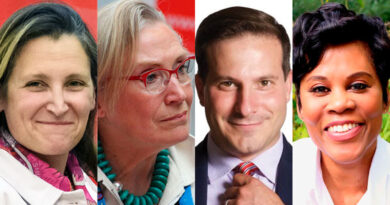