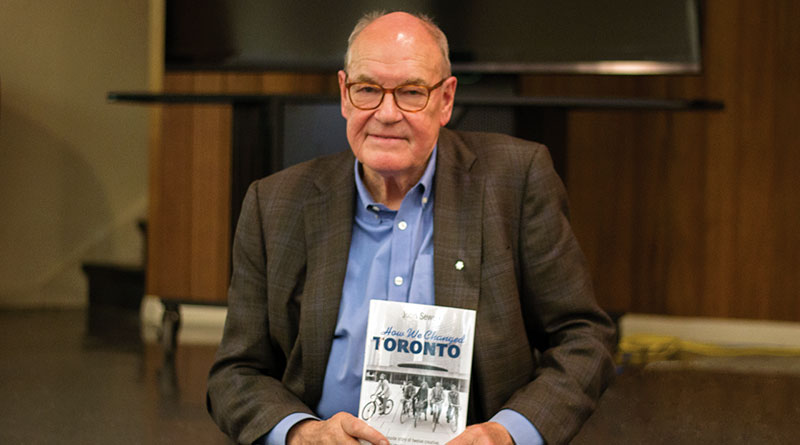 In recalling Toronto’s role on the world stage as a paragon of functional city planning, John Sewell didn’t pull punches when chastising the city’s current leadership in an impassioned talk to East York residents on Oct. 11.

The former Toronto mayor blamed the city’s poor regulation of development, as one of the main causes of discontent among residents.

“Right now the only regulations they enforce are the ones that say, ‘You can’t build that 50-storey condo,'” Sewell said. “Then they tell developers, ‘You have to make it 49 storeys instead.'”

Sewell was promoting his most recent book,  How We Changed Toronto, at the S. Walter Stewart library which hosted the Q&A with East York residents.

“I’m glad that I could have this talk here,” Sewell said. “I grew up in the Beaches, so it’s nice to speak in East York.”

Sewell reminisced about how such talks at community centres used to be much more common.

He served as Toronto mayor from 1978 to 1980, but his involvement with local politics began well before that. He graduated from law school in 1964, and became alderman of Toronto’s Ward 7 in 1969. At that time, city council pushed aggressively to involve locals in policy planning.

“In December of 1972 we were called ‘the reform council.’  It was a big change from the old guard,” Sewell said. “Within 18 months, we’d set up working committees in 31 Toronto neighbourhoods to find out exactly what each neighbourhood needed.”

Under this council-established framework, and led by the then new mayor David Crombie, Toronto became renowned for its utilitarian approach to municipal governance.

“We were called ‘the city that worked!’ That was our name among American journalists,” Sewell said. “They had a photo of David Crombie in Time magazine. Not a bad kind of honour.”

Although Sewell initially painted an idyllic picture of the city in those days, he admitted the 1970s weren’t without their share of political strife.

“I was one of the first mayors to say that the charter should protect gay rights. I got in some trouble for that,” Sewell said.

“The police chased Albert Johnson, who was black and mentally ill, into his home and shot him. I wasn’t after individual officers — all I wanted was a change in policy where that doesn’t happen anymore,” Sewell said. “Now we still aren’t in that position within the Toronto police.”

Sewell didn’t try to insinuate the city should strive to become its former self again. He did, however, suggest returning to policies that were proven to work so that more focus could be given in areas, like policing, that have been under scrutiny for the past 40 years.

Transit is one area he’d like to see reformed. He described a cyclical relationship between housing and transit. But this cycle could be either beneficial or self-destructive.

He said the issue with the TTC isn’t the subway system itself, but rather where it operates.

The University line is now extending in Vaughan. On its own, this wouldn’t be cause for alarm, but pushing further north without adding east-west relief lines only funnels more riders to an aging and overburdened Bloor-Danforth line.

Additionally, the new Vaughan terminal brings service to an entirely separate municipality while Scarborough residents have been waiting for similar service for decades.

How to do it the wrong way

Sewell also cited housing projects through his career to demonstrate how communities could be built that would allow transit to thrive.

“I was alderman of Regent Park, so I know how to do it the wrong way,” Sewell said. “But we also developed the St. Lawrence neighbourhood during my time, and it was a tremendous success.”

Sewell believes that had the city taken it upon itself to create affordable housing from the northeastern core out into Scarborough then there would already be thriving communities capable of sustaining a far-reaching subway system.

“I’d have put six-storey apartments all along Eglinton,” Sewell said. “After World War II the TTC was paying for itself. Now we need subsidies and $3 billion just to go one more stop.”

The mix of apartments, houses and shops in the St. Lawrence neighbourhood, and rent-control regulations that existed when it was built, are what Sewell credits for the success of the bustling community — a community that’s both pedestrian and transit-friendly.

He  called this lack of regulation and initiative from the city, coupled with its intent to build pricey condos downtown, and shoddy strip malls in Scarborough, the primary causes for growing discontent among residents.