A quartet of mid-January robberies targeting youth has shocked the Flemingdon Park community due to their violent nature.

The first occurred on Jan. 11 at about 3:30 p.m. near Gateway Boulevard and Grenoble Drive, where a 13-year-old boy was approached by two males. The suspects kicked and punched the boy and then took his cellphone and headphones before fleeing.

Despite the physical attack, the boy was not hurt.

The second robbery occurred the next day near Don Mills Road and Eglinton Avenue E. at around 11:30 p.m. In this case, three men approached a 21-year-old man and 19-year-old woman. A suspect who was wearing a disguise then pulled out a gun and demanded the male victim’s cellphone, but he refused. The suspects then fled the scene empty handed and the victims were not hurt.

The next day, three men ages 19, 20 and 21 were near Grenoble Drive and Deauville Lane at around 10:45 p.m. when five men approached them. The suspects looked through the victims’ pockets and one suspect pulled out a knife. One of the victims was punched in the face and his cellphone was taken. The suspects then fled the scene heading east on Grenoble.

Two of the victims were not hurt, while the one who was punched in the face received minor injuries and sought his own medical treatment.

Finally, on Jan. 19, a 12-year-old boy was near Vendome Place and Deauville Lane at around 2:50 p.m. when he was approached by three male suspects. One suspect punched the boy, knocking him to the ground. The suspects then punched and kicked the boy while one of them took a tablet from the boy’s pocket. The suspects fled the scene and the boy suffered minor injuries.

Just down the street from there, another store reported a theft two weeks prior. Braem & Minnetti Inc. Antique French Furniture told police that sometime between 11:25 p.m. and 11:30 p.m. on Jan. 11, someone broke in through a door and stole a porcelain vase with a lid. The suspect is described as a white male, about 5-foot-11 to 6-foot-1 tall, 161 to 169 pounds and has brown or blond hair.

A home was broken into earlier in the month, with the thief making off with jewellery, computer equipment and cash. The break in occurred on Hillsdale Avenue sometime between 5 p.m. and 7 p.m. on Jan. 9. 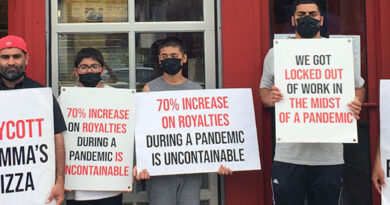