For Jeff Latosik, becoming a poet was an accident waiting to happen.

“I didn’t always write poems,” says Latosik, from his Wilson Park Road home. “It was just something wonderful that I eventually stumbled onto.”

But perhaps Latosik should have expected poetry in his future all along.

When he was 13, Latosik and three friends started a lo-fi, indie rock band in his hometown in Mississauga. Latosik was the guitar player/songwriter.

“It’s a bit embarrassing. We weren’t that good — we called ourselves, Abysmal Daze … That’s daze, not days,” Latosik says. “We thought we were really smart for having that double entendre.”

The band broke up after high school, and by 2001, Latosik had gone from writing songs to writing short stories.

“I wrote short fiction for many years,” says Latosik. “Eventually my stories kept getting smaller and smaller. Suddenly, I was writing and reading poems. And then amazingly I was 30 pages into a book of poems.”

Thirty pages expanded into over 70 pages in Latosik’s first published book of poems, Tiny, Frantic, Stronger, which was released in April of last year. The book’s cover — a white background with a large shark inside a small fishbowl — encapsulates Latosik’s own notions about life and poetry.

“There’s a menacing quality to a lot of the poems,” he says. “The shark symbolizes the idea of being intense and contained. In a way, it represents what a poem is. It’s this funny way of containing something that’s very alive within a small span of words.”

Latosik says that the book includes topics that aren’t traditionally found in poetry, such as the suburban experience and popular culture.

The reception for Tiny, Frantic, Stronger has recently earned Latosik this year’s Trillium Book Award for English-language in poetry.

“The awards are considered to be recognition of literary excellence,” Murphy says. “It helps raise awareness of Ontario authors who may not have been previously in the public domain.”

Murphy says that Latosik was in esteemed company.

“Jeff had a lot of competition in his category,” she says. “Having met him through the process, I think he’s very deserving of the award and should be proud of himself.”

According to Murphy, Trillium received 360 written submissions and out of that pile, 10 English books and 10 French books were nominated across this year’s four categories — main prize in English, main prize in French, English-language poetry and children’s literature in French.

Having followed the awards for the past few years, Latosik says he feels humbled by it.

“A lot of my heroes, people I love to read, have won this award. That’s what makes it so special to me,” says Latosik, dropping names such as Jeramy Dodds and Karen Solie — past winners in poetry.

Along with recognition, the $10,000 prize has given Latosik’s lifestyle a boost.

“I haven’t bought anything with it yet, but it’s nice to have money for a change,” he says. “You don’t make much as a poet, so it’s nice to be able to pay your credit card bills.” 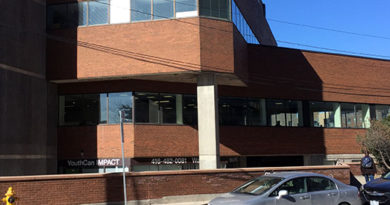