Bad news for Leasiders who looked forward to spending a few lazy days at the pool this summer: the city announced in March that Leaside Memorial Gardens’ pool will be closing for major structural, architectural and mechanical upgrades from June until December.

“It’s in dire need of repair, and my understanding is that it was identified as such awhile ago, but they have to move money around for emergencies, so it kept getting pushed down the list,” Ward 26 councillor Jon Burnside said. “Until it reached the point where they feel they can’t wait any longer.”

Repairs to the 65-year-old facility, which opened in 1951, are to include both interior and exterior wall repairs, an upgraded drainage system, additional insulation, and painting, as well as repairs to the pool’s patio, bleachers, and filtration room.

Altogether the repairs could cost the city around $500,000, Burnside said, noting that despite the pool’s age, it was in remarkably good condition.

Unfortunately, its repair still means that Leasiders will have one less place to cool off during the summer months, but Burnside said he believes that June to December may actually be the best time for repairs.

“Schools aren’t using it, a lot of people go away to the cottage, and a lot of programming takes place from September through May,” he said. “You think of a pool and imagine swimming in summer, absolutely, but I imagine it’s actually less busy.”

In an email, Toronto parks and recreation staff said the work had been scheduled during the summer months because other outdoor pools are available.

Ward 26 could be rematch 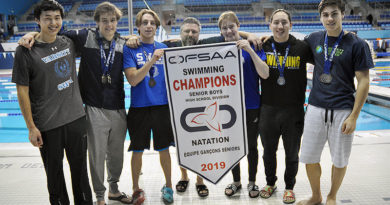