If there’s one thing students Tara Pearson and Tracy Chen have in common, it’s their long-standing commitment to creating social change in their city.

That’s why they’re both taking part in the city’s Toronto Regional Champion Campaign, which partners up young women interested in politics with female councillors, in their cases Ward 30 councillor Paula Fletcher, to serve as their mentors.

Pearson first realized she had an interest in politics at a Toronto District School Board picket line.

“I grew up with parents who would take us to rallies,” she said. “I went to school in the Harris days, and there was strike after strike after strike, and a lot of people who were really unhappy with some of policies in the provincial level.”

She said the passion and dedication of the teachers showed her that everyday people could have a tremendous impact on affecting change.

“Most of the time when it gets to a strike … it’s because people feel like they really haven’t been heard,” she said. “These were the people on the front line, so it was important that their opinions be taken into consideration when creating policy.”

Having come from a theatre background, Pearson also had some political experience as part of the Alliance of Canadian Cinema, Television and Radio Artists Toronto’s council. She’ll also be graduating in June with a degree in environmental studies from the University of Toronto.

“That’s how I became aware of many of the issues that affect Torontonians,” she said.

She left Ryerson in third year to pursue a Juris Doctorate and Master of Business Administration at York University, which she feels would also prepare her for a career in politics.

“Before becoming a politician, I want to have a career and an established background so I can bring as much as I can (to politics),” she said.

While working with Fletcher, Chen will be examining changes to the city’s recreational services, specifically the welcome policy for families below the low-income cut-off.

She said she decided to focus on a specific program so she can make a demonstrable difference while still studying full time.

“With this project I’m involved in, we want to make sure that this project will accomplish something,” she said. “That’s why I’m doing something with a narrower focus.”

Fletcher said she thought it was a great idea to focus on a single initiative in social policy.

“She wants to really understand how the city created the welcome policy,” she said. “For me I think it’s tremendous that someone is so interested in that field, and will really be looking into it with a councillor’s eyes.”

She said that Pearson picked the right ward to further her knowledge of environmental studies.

“Tara is very interested in community gardening and food issues, which are sprouting up all over Ward 30,” Fletcher said. “It’s a good community builder, and Tara already knows a heck of a lot about that already.”

Pearson said she hopes to bolster her knowledge not just on environmental studies, but how it can play a role in a municipality like Toronto.

“What I want to take away is a greater understanding of an organization of this magnitude,” she said. “I don’t know if I would have been able to understand that environment and the mechanism and processes that are in place through which we can actually affect change here in our city.”

Pearson, who grew up in Toronto-Danforth just north of Ward 30, currently lives at Cabbagetown.

“It’s just across the Don, so it was convenient in that respect as well,” she said.

Chen is currently living at York University, but doesn’t mind commuting to Ward 30 for what she sees as a unique opportunity.

“I was really excited to get involved because this is a once in a life time opportunity to work one on one with a city councillor,” she said. “Not only do you get to job shadow them, but they’re also mentoring you.”

Fletcher said she felt fortunate to have been paired with two women so committed to creating positive changes.

“We need to increase the percentage of women who hold public office in every municipality and indeed in provincial and federal parliaments,” she said. “So this is part of that, in encouraging young women to see what it takes and what it’s about.”

Working to save east end pools 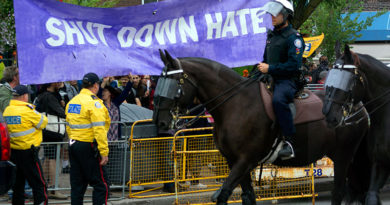