Water is the single most important element in sustaining life.

Despite this, nearly 800 million people do not have access to safe drinking water, according to the World Health Organization.

That’s why the Rotary Club of Toronto Eglinton joined the Rift Water and Sanitation Program, an initiative that brings a lifetime supply of fresh water to 28,000 people in Nakuru, Kenya.

Members of the club were given the opportunity to learn more about the project at a recent presentation by the chair of the Water and Sanitation Rotarian Action Group, Ron Denham.

“It’s wonderful to see what can happen when people have access to clean water and sanitation,” Denham said of the impacts he’s seen of his program which builds rainwater-harvesting tanks.

“This program does more than provide water…. Water is a means to an end but not an end itself.”

A lack of clean and safe drinking water has enormous consequences on health, social progress and overall quality of life, Denham said.

“If there’s no water, young girls aren’t going to stay in school, they drop out early, they get into early marriages, they have children early, and we get into that vicious cycle of excess population growth.”

“Lack of water means no food security…. If they can’t grow food, there’s poverty, hunger, malnutrition, and sickness,” he added.

He also pointed out how in many developing countries some of the most common ailments such as cholera and dysentery are caused by unclean drinking water.

Women in particular are disproportionately affected by lack of access to safe water, because they are usually the ones consigned to hauling water back and forth from the nearest body of water.

“When the young girls finish hauling water they arrive in school tired, late and in many cases completely exhausted,” Denham said.

“Rainwater harvesting frees the women from the chore of hauling water.”

By providing a means to access safe drinking water, women are free to learn trades, start their own businesses or otherwise put their skills to more productive activities.

The Rift Valley Water and Sanitation Program provides material and training for families in Kenya to build a 10,000-litre cement rainwater harvesting tank.

Because the soil in Nakuru was so heavily contaminated with fluoride, wells were not an option.

The Toronto Eglinton Rotary Club is currently building about 60 tanks a month at a cost of approximately $450 each.

Over the course of the program, the initiative has received about $825,000 in contributions.

While the Rotary Club provides materials and training, the program requires families to contribute about $60, help with building the tank, and install eaves troughs, drain pipes, and plant 100 trees on their property.

Denham said this approach empowers the families rather than creates a cycle of dependence.

“The program is successful because it’s owned by the community,” he said.

“Our Rotary Clubs are involved yes, but it is theirs…. The Nakuru Rotary Club invested in people, not in technology.”

They also introduced a micro finance system that encourages families — especially women — to borrow, save and invest money.

This allows women to start businesses such as growing produce, sewing garments or breeding fish farms.

“Contrast that with what happens so often in the world of aid: we give people things,” Denham said.

“We don’t need big bucks to solve the water problem.”

Arlington to live on in Kenya 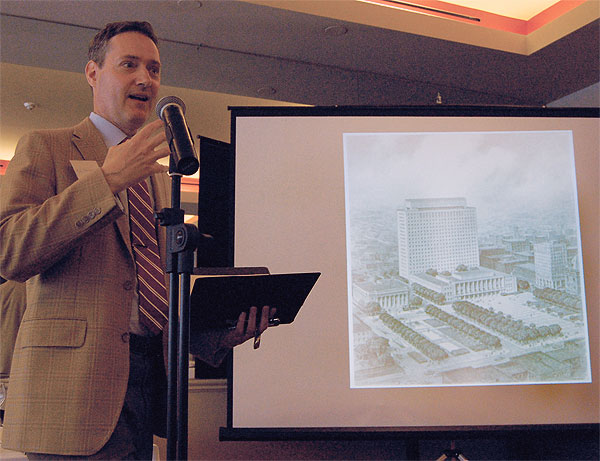