Some lawyers must be scratching their heads that after three years of law school they have ended up working in a call centre.

Because of the ongoing strike, many of the city’s legal beagles have been posted elsewhere.

“So to keep those (cases) going, there has to be a redeployment for them.”

And some lawyers from his team are doing picket line monitoring.

Another impact of the strike is that at least half a dozen Ontario Municipal Board cases have been postponed since the strike began.

“What I’m doing is looking at the cases one by one,” he said. “So far I have adjournments for 6–8 cases from when the strike started until late July at this moment.”

The postponements aren’t just being sought so lawyers can continue to man the phones.

“In some cases, the city’s witness might be a planner, who is a member of the union and isn’t available.”

And there’s no guarantee the OMB will grant postponements.

“I still have to ask the board for that adjournment with the consent of the other party,” said Paton. “In most cases, the other party is cooperating.”

In most cases the land use planning department deals with OMB cases and minor variances that would go to the committee of adjustment. 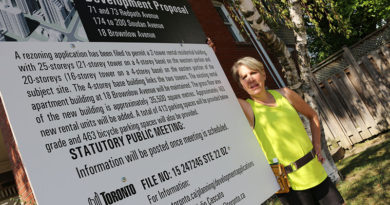