Sad news for lovers of Canadian art: police detectives aren’t any closer to nailing the thieves who pinched 11 original works from the Canadian Fine Arts Store in mid-July, which included pieces from the Group of Seven, valued at $400,000.

“We didn’t think it would happen here,” said gallery manager Terri Roberton, gesturing to the bare-bones studio located at Mount Pleasant and Eglinton avenues. “We had everything we were supposed to have  cameras, an alarm system.”

“We keep things low-key here for a reason,” she added.

According to Toronto Police Detective Erwin Huber, the robbery happened late on a Sunday last month. The thieves broke into the gallery, which is closed on Mondays, by practically destroying the metal doors at the rear. The owners recently upgraded the security system and installed of high definition surveillance cameras, which police hope will help them identify the parties. But, Huber admits, art robberies can take a long time to solve.

International policing agencies like Interpol and auction houses are notified soon after a break-in is reported. Works by high profile artists are not easy to sell in an open market, so they remain underground.

“Anyone who has the artwork is finding it difficult,” Huber told the Town Crier.

A recent theft from a gallery on Davenport Avenue resulted in two arrests, but the works have yet to be recovered. Huber said the men, who were charged with break and enter, aren’t talking.

“We haven’t been able to tie the two cases together, but we’re not ruling anything out,” he added.

Where these pieces end up is still a mystery.

“For bragging rights, I’m sure,” she said.

Typically the pieces are not returned by police, but through art loss registry services, Huber said.

But police aren’t calling it quits yet.

“I got a feeling someone will call in with a tip. Because it’s the Group of Seven, people are pretty interested in it,” he said. “It’s just a matter of time before we catch up to them.”

Police on the hunt for stolen paintings 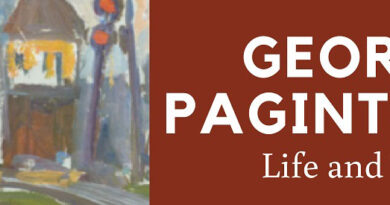 No curtain call for this gallery