For North York actor Melinda Shankar, it was an easy decision to move to Toronto from Ottawa to kick-start her career at the age of 16.

The star of shows such as MuchMusic’s Degrassi: The Next Generation and YTV’s How To Be Indie knew she had to move to the big smoke to realize her dreams.

“Moving out of home when you’re in grade 10 is pretty tough,” said the 20–year–old entertainer who lives in Willowdale. “For me, it was literally ‘If you want this career you’re going to have to work for it and change your life and grow up and be 30 when you’re 16.’ ”

She hasn’t looked back since. Conducting the phone interview in a cab after returning from the set for Degrassi, she said it’s not unusual for her to work 12-hour days.

Shankar’s hectic schedule is quite the departure from her life in Ottawa, where she started appearing in commercials and print ads as a model as early as age 10.

Fortunately for Shankar, her sister was finishing up studies at York University when she moved to Toronto, so to make the change of scenery a little less jarring, the two moved in together.

Shankar had to leave two of her favourite activities behind in Ottawa: martial arts and ballet, not to mention her friends and family.

But she feels she didn’t miss out on the normal Canadian teenage life because she’s lived it all, just through a different avenue: her Degrassi character Alli Bhandari.

“For my real teen years, I was working 12 hours a day and then coming home and memorizing and living this adult life, so I guess I was kind of living through Alli in that sense,” she said.

For Shankar, Degrassi’s emphasis on real teenage issues such as pregnancy, drug abuse and eating disorders has given her a healthy perspective on teen life.

“I feel like I’ve even been around it so much so that I didn’t really miss out on any high school things,” she said. “It’s not like I don’t know about any of the relevant issues, because we’re still dealing with them and I can see what the consequences would have been had I chosen those routes.

“It’s kind of nice to be a couple steps ahead and not have to go through that myself,” she added with a laugh.

Shankar’s character is a somewhat rebellious South-Asian teen frequently at odds with her strict, traditional parents.

That role didn’t come as naturally to Shankar as one might think.

“My own parents couldn’t be farther from Alli’s strict parents … and I think if they hadn’t such an open mind then I wouldn’t have been able to do this,” she said.

Degrassi is not the first role for Shankar in which ethnicity features prominently. In How To Be Indie, Shankar plays an Indian-Canadian teen who juggles her Canadian and South-Asian identities.

She doesn’t shy away from the roles. In fact, she jumps at the opportunity when she sees postings listed as “open ethnicity”. She believes it’s important to reflect a diverse range of backgrounds on television, especially in a city like Toronto.

“I absolutely embrace it, because I think it’s important and it’s real,” she said.

Shankar acknowledges that some themes in Degrassi, like the strict South-Asian parents, can be seen as stereotypical and even insensitive to some.

But judging from fans’ reactions, she feels the show’s producers are doing a good job.

“I can tell they’re doing it justice from the amount of fan mail I get from kids being like ‘Oh I can completely relate to Alli, and for the first time I feel like I’m not the only one,’ ” she said.

While it’s certainly been a wild ride for Shankar, she has learned that not everything in the entertainment industry is as it appears.

“I remember watching YTV and seeing The Zone and now I’m being featured on The Zone promoting the show,” she said. “It was so much smaller than I had in my mind.”

One of her favourite memories?

“Going to the Kid’s Choice Awards in L.A. and sitting beside Will Smith and the Jonas Brothers, and it just being this surreal auditorium with every single person you’ve ever seen on TV being around,” she beamed.

As Shankar steps out of her cab, she wraps up the interview before heading up to her North York condo.

She may not be sure where her career will take her next, but she’s grateful she’s been given the opportunity.

“It seemed like overnight I was in this crazy whirlwind of a dream,” she said. “It’s kind of crazy to see all the people who I used to watch as a child on TV … and now we’re just co-workers.” 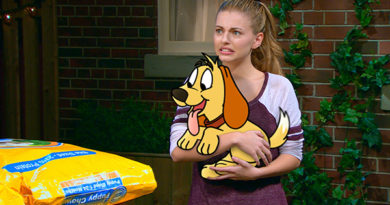