Willowdale MPP David Zimmer has recently been the target of an anti-Semitic piece of mail which he calls “a piece of juvenile smut.”

“Whoever sent that has issues that need some attention,” Zimmer said. “I would imagine the people who do stuff like this also send awful things to other people of other orientations.”

Zimmer’s office immediately reported the card to Toronto Police’s 32 division, which covers Willowdale, and the Centre for Jewish and Israeli Affairs, which tracks such incidents.

“We want to highlight the importance of making sure these things are reported instead of ignored,” said Zimmer’s executive assistant Alex Barber. “People should be aware these things still go on … and that they are tracked.”

The police told Barber they would investigate the incident.

“I’ve worked for David off and on for about 10 years and to my knowledge we’ve never received anything like this in the past,” Barber said.

“This is exactly the kind of high-level intellectual thought I would expect from a four-year-old,” he said. “On the one hand, I think it’s important for people to know this kind of silliness goes on, but on the other hand, we should not make more of it than it is.

“Somewhere out there is a foolish little mind hiding in the dark, rubbing his hands together with glee at how clever he is,” Rudner said. “That person should stay in their cupboard and maybe come out in 20 years when they grow up.”

While Zimmer was offended by the card and the remarks it contained, the irony is that he isn’t Jewish, but rather Christian.

“My father’s side of the family are German, and my mother’s side are Scottish,” he said. “Zimmer can often be a Christian name. Often it’s a Jewish name.” 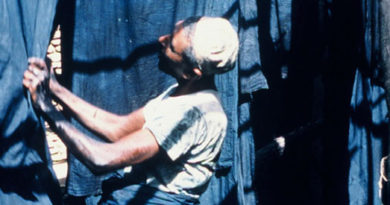 June 1: Journeys in Indigo at the ROM