There are about 3,500 apartment doors within the 34 high and low rise buildings of Thorncliffe Park and Abbas Kolia said he plans to knock on every one of them.

“It’s tough but still I have energy,” said Kolia, president of the Thorncliffe Park Tenant’s Association. “Behind me I have a lot of volunteers.”

From Jan. 21 to Feb. 1 Kolia and his group of volunteers are going door to door in the vertical community to help raise money for the Toronto East General Hospital.

For the more than 30,000 residents of Thorncliffe Park, Toronto East General is their closest source of medical care.

In order to fund its $210 million expansion project, the hospital has embarked on a fundraising campaign. It has already raised $45 million of its $60 million goal. Kolia said his group aims to raise $25,000–40,000 to contribute to the project.

“We don’t a have facility here so we get services from other communities,” he said. “Why shouldn’t we get involved and get whatever we can give them.”

Before knocking on a single door, Kolia’s group raised more than $2,000 from the dozen or so people standing in the lobby of 71 Thorncliffe Park Dr. during the fundraiser’s kick-off, including Ward 26 councillor John Parker and MP John Carmichael.

MPP Kathleen Wynne’s canvassing experience was put to good use as she went door-to-door, floor-to-floor to solicit donations from residents.

“I think it’s great because we’re going to where (the residents) are,” she said of the campaign. “They don’t have to give up time. They can still be with their families and yet they can still take part in the initiative.”

The group of volunteers received a mostly warm reception at the doors that were answered. Wynne said the residents’ willingness to donate to the hospital’s cause says a lot about the neighbourhood itself.

“It says that it’s a very community-minded neighbourhood and people in this neighbourhood understand how important it is to have these public services and so that’s why they step up to the plate,” she said.

Those who weren’t home when Kolia and his crew came knocking need not worry. He plans to occupy a table within the East York Town Centre where shoppers can stop by and drop off donations during the weekend of Feb. 18–19. 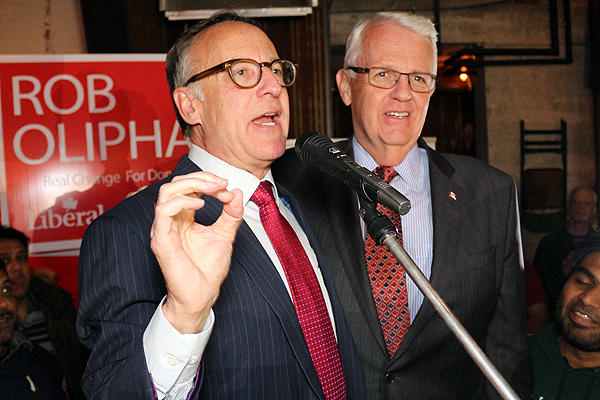 Oliphant back in seat Carmichael ‘looking after’ for him