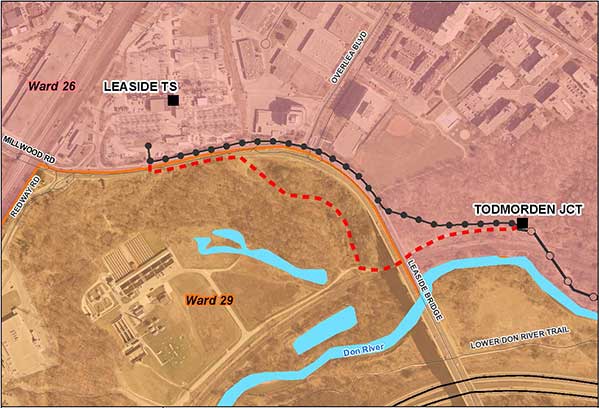 Hydro One is planning a critical infrastructure project to cut through Leaside – and would like your opinion on which direction it should take.

However, its draft environmental report on the project and the public consultations have been postponed from this month to later in the fall.

The transmission services provider, which collaborates with Toronto Hydro, says it needs to replace aging infrastructure. The route runs between Millwood and Redway roads and the Todmorden Junction, east of Millwood, north of the Don River.

The organization was to release a draft version of its plan on Sept. 1, and run a public information event on Sept. 15.

“All of our projects of this magnitude include opportunities for the public to communicate with us, to ensure they know what’s going on with the project, and that they have the opportunity to provide input,” Hydro One communications officer Nancy Clark told the Town Crier.

This would not be the first time Hydro One has reached out for Leasiders’ opinion regarding the project. It ran a series of similar public events in August.

According to materials at the August events, Hydro One is giving residents two choices. Option 1 would replace two sections of 1950s-era underground cable between the Leaside Transformer Station near Millwood and Village Station Roads, and between the Lumsden Junction and Main Transformer station further southeast.

Option 2 would replace the overhead shield wire used to protect the area’s power lines from lightning between the Todmorden and Lumsden Junctions with fibre optic wire, enhancing Hydro One’s ability to monitor and control its transmission network.

Hydro One staff are recommending Option 2, which would require less complex construction materials and be less disruptive to transit, pedestrians, and residents. Option 1, however, would have less on an effect on wildlife.

Clark said many residents who have met with Hydro One staff at previous consultations have expressed interest in preserving the area’s biodiversity and minimizing the environmental impact.

Hydro One plans to run a series of biodiversity workshops aimed at identifying ways to protect the area’s wildlife. This may include planting native species, creating new habitats for pollinators including bees, and removing invasive species, Clark said.

No date has yet been sent for the next public information meeting.

Underground river no threat to LRT