How many fathers do you know have given their daughter a mohawk?

“That was the best haircut my dad ever gave me,” says Antonella in between serving coffee and snapping photos of her barber dad and his longtime customers, who are all packed into their favourite barbershop for the very last time.

Her tale elicits laughter from a group of people — mainly men in their 50s to 70s — who have come by with bottles of wine, cards and well-wishes. They are here on a chilly March day to share memories with the man they know as Leo, whose Leman’s Barber Shop in Sunnybrook Plaza has been closed since Boxing Day.

Those doors are now permanently closed, after the March 25 and 26 goodbye event to which Leo personally invited hundreds of customers by telephone. Sadly, ill health has forced him to retire.

The barber chairs have been removed from the second-level room that has been Leman’s for over 20 years — all the better for the steady flow of people who fill the space on the first day of the drop-in.

A golden Christmas banner still hangs over the scene, holiday cards dangling from it. An old pink and silver foil Christmas tree is suspended from the ceiling, twirling over silver-haired heads that have been cropped by Leo for decades. Many of the supplies and photos have already been packed and taken away, but a dusty coat rack remains. Two yellow sticky notes are tacked onto a hanger, each with pencil-scribbled promises to be back in five and 10 minutes.

These items bear witness to the activity that was, until recently, Leman’s Barber Shop.

But it’s the intangible friendships and recollections that hold sway here, much more than physical remnants. Leo is a Leaside legend looming large in the minds and hearts of many.

His story in Leaside spans some 60 years, beginning in the mid 1950s when he started snipping hair at a shop on Eglinton Avenue East near Laird Drive. When the block burnt down in the late 1980s, Leo looked around for another space, eventually buying the second-level location at Sunnybrook Plaza in 1989.

Back in Leman’s, there’s steady banter between Leo and his cronies.

“If I knew you were coming I’d have locked the door,” Leo quips to one gent.

Leo’s clients have remained slavishly loyal to him over the years. It’s more than good haircuts that have kept them coming back.

Even though Bill Becks has lived in Orillia for the past 17 years, that hasn’t prevented him from making the hour-long trek to get a regular trim from Leo.

“It was always such a fun experience to come down,” Becks says.

There are many others who have followed Leo well after having left Leaside. John Mason, who now lives in Unionville, says he’s known Leo for 60 years, having met him shortly after getting a job in the former Leaside Industrial Park.

Mason worked in England for a time but says he tracked Leo down when he returned to Toronto. And when Leo moved away for a few years, Mason says he found him when he returned, too.

“He became a friend,” Mason says.

Meanwhile, Brian Clarence says he’s been coming to see Leo since he was knee-high. Over the years, his entire family — his father, brother and son — have been regular clients.

As with many in the room, Clarence says he’s come consistently for a cut every two weeks or so.

“It didn’t matter where I lived,” Clarence says, adding he and Leo “talked about everything.

There just isn’t enough room to list the sports teams Leo has supported; to speak of every Leasider, police officer or Salvation Army representative who’s had hair done by Leo; to tell all the tales of the lives Leo has touched.

One story goes if Leo couldn’t be found after work, he’d be making a house call to one of the elderly in the neighbourhood. There was even a time when he ran a barbershop out of the veteran’s wing at Sunnybrook Hospital on his days off, charging $2.50 a cut.

Sadly, Leo has daily visits to Sunnybrook himself these days. He wanted to work until he was 90, he says, but can’t even stand up now.

“My dad has had a profound impact on people,” says Antonella, mentioning several grown men who told her they literally owe their lives to Leo because he helped them through such difficult times in their younger years.

Closer to home, the younger generation is already feeling the loss. Antonella’s son, A.J., has been getting his hair cut by his “Nonno” since he was seven months old. When his grandpa was hospitalized after Christmas, A.J. refused to get his hair cut for two months.

Antonella, meanwhile, grew up sweeping hair in her dad’s salons and says she cherishes that time.

“He taught me what being good is about.” 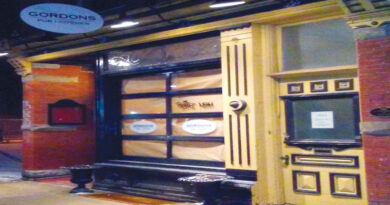