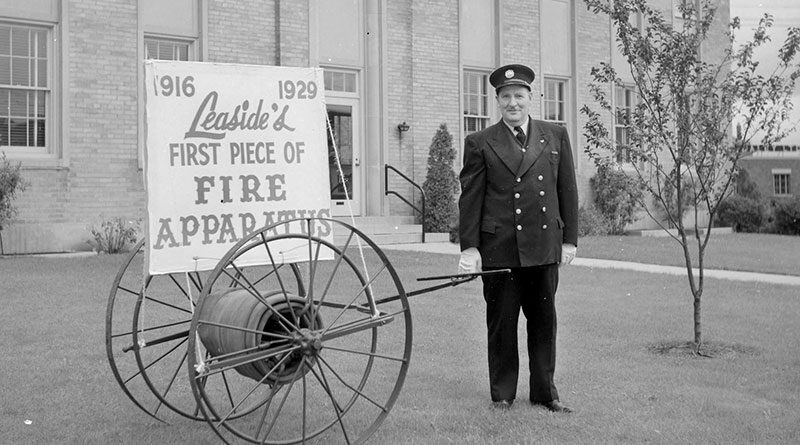 Leasiders have long valued their area as a distinctive community within Toronto. But now the town within a city is at risk of being dissolved into the larger metropolis, some residents warn.

The fear of losing the area’s unique character is driving them to start a local museum to preserve the past.

“We need to save what we have before it’s gone,” says Ann Brown, chair of the newly formed Leaside Heritage Preservation Society.

So far the LHPS has started searching out locations for the museum and seeking items that residents could contribute to it, Brown says.

“It’s surreal how much is sitting in basements people didn’t know what to do with.”

This includes items of historical value such as information and photos of significant Leaside buildings and people, as well as the seemingly mundane items they’ve been offered showing everyday life in Leaside, like local Boy Scout uniforms and baseball league badges.

Brown, who grew up in Leaside and has served on the arena board, has been thinking and talking about such a project for a long time.

“Six or seven years ago I was saying we Leaside needs a museum,” she says. “Then COVID arrived [last year] and it seemed it was a grand time to start as a community project people could do from their homes.”

She met with local MPP Kathleen Wynne (you can watch a video discussion between Wynne and Brown here) and with the Toronto Historical Society who encouraged her to develop the idea. At a September meeting of friends, city representatives and THS affiliates, the Leaside Heritage Preservation Society became a reality.

Lea is a direct descendent of the family that 200 years ago started farming in the area and eventually gave Leaside its name.

Every one on the board is actively dedicated to preserving and promoting the historical contributions of Leaside for the enjoyment and education of the community today and for future generations, Brown says.

Brown said she is particularly interested in the history of the Laird Drive area, which is currently undergoing sometimes controversial redevelopment.

It was taxes paid by businesses in the once burgeoning industrial area that kept home taxes low and helped Leaside’s residential area to grow, she notes.

Her favourite heritage sites are the original Leaside town hall at McRae Drive and Randolph Road, built in 1949, and the Leaside Memorial Gardens at Laird and Millwood Road,, opened in 1951.

The group is also seeking community help in creating a logo. Ideas are being accepted until 11:59 p.m. on Jan. 25.

Wynne to run for leader

Another liberal win for Liberal Wynne