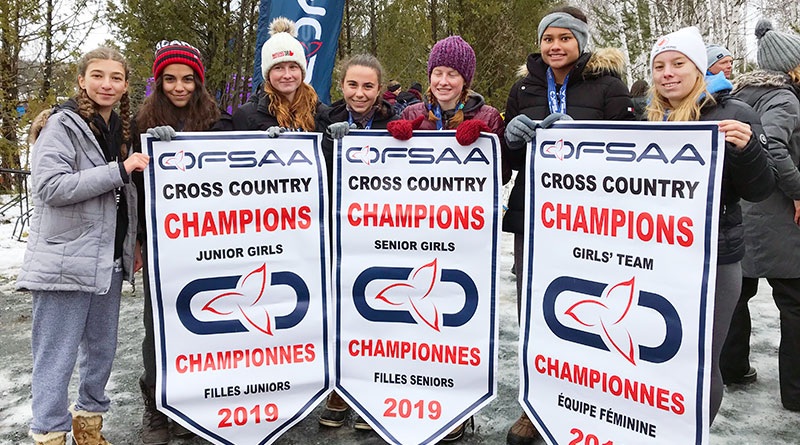 The loss of one shoe wasn’t going to keep Chloe Coutts from earning her Leaside girls’ cross country team a gold medal at OFSAA.

At the 100-metre mark of the race, another runner stepped on her right heel and her footwear flipped off.

“It was kind of like a stampede, where even if you wanted to stop and pick up your shoe, you couldn’t because you would’ve gotten trampled,” Coutts said in an interview. “I just kept running, wondering, ‘I wonder how this is going to go?’”

As the race went on, the foot got worse.

But, naturally, all was fine, Coutts said. The adrenaline was kicking in as she sped through the snowy, gravelly six kilometres, Nov. 2 in Sudbury, with one shoe.

After the race, with her foot sporting a deep blood blister, her father, Duncan Coutts, carried her the rest of the way to the car.

“He was joking, ‘You made my back hurt because I had to carry you’,” Chloe recalled. “You’re so pumped up on adrenaline, that I didn’t expect [my foot] would be as bad as it was.”

For two days, Coutts walked around on crutches, then had an additional nine days off as her foot healed. She couldn’t run at the most recent Athletics Ontario meet.

It was exemplary of the kind of dedication to the sport head coach Helen Panayiotou observes from her charges, who earned three golds at OFSAA. One in the aforementioned senior category, one for junior and another for an overall score.

Nicole Rampersaud and Panayiotou trained the team two nights a week, while the Central Toronto Athletic Club has them another two nights.

“I wasn’t expecting her to finish, but I know her drive,” Panayiotou said. “She knew the junior girls had won their gold. They have never won team gold for senior girls, so that was their motivation.”

The running troupe will hunker down for the winter, and resume training again come March for track and field. Cross country’s core runners will then be joined by Isabella Goudros.

For Chloe Coutts, it’s all about the team effort.

“I think the fact that having a team makes cross country a lot more fun, and sometimes when things go sideways, you just have to roll with it,” she said.

Province needs to step up to fund education