Toronto and East York Community Council stamped denied on two of the three of the applications to demolish the Maclean House and have made the conditions for the one they did approve so tight that it will be impossible to knock the structure down.

The building, built in 1910 by celebrated architect John M. Lyle, was once home to publisher John Bayne Maclean but is currently carved up into 10 apartment units.

Community council dealt with the matter after little debate possibly due to city staff’s recommendation to refuse the demolition of the heritage property at 7 Austin Ter.

However, the story is not quite that simple.

St. Paul’s Councillor Joe Mihevc explained that there are actually the three demolition applications before the city regarding this property — one related to it as a rental building, one as an owner-occupied residence and one as a heritage building.

As a rental property the city can refuse a demolition permit if the replacement building doesn’t mean official plan housing policies, said Mihevc.

City staff recommended refusal because the proposed replacement structure would include eight townhouses but only replace six of the existing nine rental units. Community council voted to reject this demolition application.

Community council had no choice but to approve a demolition permit for the site based on a 2009 building permit issued to the property’s owner to construct a three-storey replacement home. Under city bylaws the chief building official was obligated to issue a building permit, states a staff report.

However, as the city staff report points out, the owner may have a permit to build the three-storey home but has actually applied to construct something else: eight townhouses and a six-unit apartment building.

Whatever the owner’s intentions, the city still can block the demolition.

“We don’t have the absolute right to refuse the (residential) demolition, but we have the right to get conditions of when the demolition is possible,” Mihevc told community council. “The condition is they receive permission under the Ontario Heritage Act and we’d fight vigorously against that.”

Because the Maclean house is a designated heritage property its owner had to apply for a special permit in order to tear it down which was, not surprisingly, turned down.

Mihevc made a passionate plea to community council that the city protect the Maclean House property.

“We need to take strong steps to make sure this building doesn’t fall apart by neglect,” said Mihevc. “(City) staff has been very engaged in this issue. I’m thankful to them.”

He said the community wants to send out the city’s municipal licensing and standards staff to the site to make sure it doesn’t get any worse particularly in light of the fact that the owner had already removed aspects of the home in late 2009 before it was officially designated.

City council still needs to vote on the demolition applications.

Our history begins at home

City moves to save Maclean House 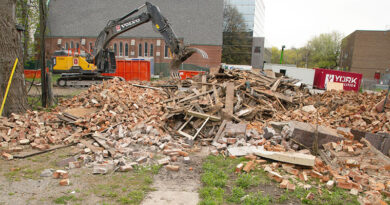