On March 5, St. Paul’s lost a truly inspiring citizen, Charlotte Maher. On April 12 at the CNIB at 3.30 p.m. we will celebrate her life. At our St. Paddy’s Day warm-up at the Unicorn Pub, another great citizen, Howard Brown, suggested that we toast Maher.

She really was an example to all of a life genuinely devoted to contributing to our community. SPRINT, POINT, Central Eglinton Community Centre and CareWatch were all the beneficiaries or her vision and energetic leadership. “Citizen Charlotte”was politically engaged in the best sense, always paying attention to everything that affected her community.

As it said in her obituary: “She encouraged people to be educated and engaged consumers of social services and to demand the right to influence policies and practices that affected their lives.”

She understood that great public policy involved all levels of government. She understood that creating better communities involved holding governments to account. She had her eye on all the decisions taken municipally, provincially and federally that would positively or negatively affect her community. As her elected representative, her tough questions were awe-inspiring. She didn’t miss a thing. She took elections seriously. She was worried about complacency. She was worried that growing cynicism was resulting in lower voter turnout. She understood that lower voter turnout was undermining our democratic institutions and progressive movements.

I’ve been struggling on a book reflecting the need for a real democracy between elections that we boast about here in St. Paul’s. I’ve tried titles such as Democracy between Elections or Democracy is too Important to Leave to the Politicians, and subtitles like A Politicians Guide to Listening and A Citizen’s Guide to Being Heard and From Cynicism to True Citizenship. I’ve been so stuck in getting my thoughts to paper. My hope was that this book could catalyze Canadians to get involved. I know that a healthy democracy requires citizens to be paying attention — like Maher.

I know that when citizens become so cynical that they tune out, our democracy is at risk. Canadians have tuned out and are seriously turned off by what they see. I wanted this book to be an antidote to cynicism. I wanted this book to persuade Canadians that participation in democracy is way more than just voting — although that’s an important start.

Somehow Maher’s passing has galvanized my need to get on with the book. I think I need to go sit with my laptop in the parkette named after her and get to work. Her legacy is truly inspiring.

I can’t let her down. 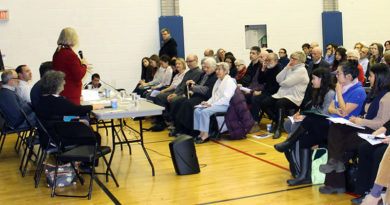 Homelessness to be subject of next Toronto-St. Paul’s summit