A rash of street robberies has struck the area during last half of January.

On Jan. 26, a 23-year-old man was approached by a group of four men near Don Mills and Parkway Forest Drive. There was a struggle and then the victim was punched and kicked by the suspects, one of whom pulled out a gun while another pulled out a knife. At that time, a passerby saw what was happening and the suspects fled the scene.

The victim received minor injuries and was treated at the scene by Toronto EMS.

A few days prior to that incident, a 13-year-old boy was victimized in a robbery near Bayview and Sheppard avenues. The boy was approached by three male suspects at around 3:30 p.m. and was told to hand over his cellphone and cash. The boy did so and the suspects fled into the nearby subway station.

The boy was not hurt.

About a week before that, a man and a woman were both sent to hospital following a street robbery near Don Mills and Sheppard.

The 39-year-old woman and 38-year-old man were approached by a male suspect at around 10:05 p.m. on Jan. 17. The suspect pushed the male victim to the ground and kicked him in the face, before taking a gold necklace from the female victim. The suspect then fled south on Don Mills.

The most recent of the break-and-enters occurred on Jan. 29 in the Bridle Path. A resident of Hyde Park Circle told police someone broke in through a window sometime between 11:30 a.m. and 1:30 p.m. and stole cash and jewellery.

On Jan. 20, a resident of Daleberry Place told police someone broke in sometime between 3:30 p.m. and 10:30 p.m. The thief managed to get away with jewellery, computer equipment and audio visual equipment.

Sometime between 8:15 a.m. and 6:30 p.m. on Jan. 18, a resident of Victoria Park was victimized when someone broke in through a door. In that case, jewellery was stolen.

Finally, on Jan. 15 sometime between 11:55 a.m. and 1 p.m. someone broke into a home on Denlow Boulevard by forcing a door open. Cash, jewellery and computers were taken from the residence. 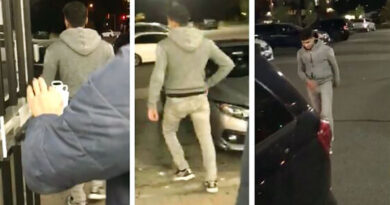