There likely wasn’t a great deal of merriment at the Makhniashvili household this past holiday season.

In addition to the continuing mystery of teenager Mariam Makhniashvili’s disappearance, her father, 50-year-old Vakhtang Makhniashvili will remain in prison for the foreseeable future. He’s been held at the Toronto East Detention Centre since early November when police charged him with attempted murder for allegedly stabbing a couple in their home.

“He’s definitely not going to obtain bail in the interim. It’s pretty serious. The second (charge) is attempted murder and the first is aggravated assault,” said Calvin Barry, Vakhtang’s lawyer.

He pointed out that if convicted, an attempted murder charge carries a possible life sentence, while the aggravated assault charge carries a sentence of up to 14 years. “It’s hard to say what his (prospects) are at the moment,” Barry said.

In yet another twist in the family’s strange saga, the couple who were stabbed had posted bail and acted as sureties for Vakhtang after he allegedly stabbed a neighbour in a separate incident in May. However, he’d had a falling out with the pair after he became suspicious of their motives.

The second stabbing followed just days after Mariam’s brother George was briefly thought to be missing as well. George was found within a day and Barry said the incident was not connected to the stabbing. The victims, David and Delores Langer, are expected to recover.

“(The situation) is difficult, but with my son we’ll manage it,” said Lela Tabidze, Mariam’s mother mid-December.

Sounding worn, Tabidze said by phone she wants the public attention on her family to remain focused on the search for her daughter, who has been missing for over a year now since vanishing on her way to school in September 2009. The disappearance came just months after she and her brother arrived from their native Georgia to live in Canada with their parents. Despite extensive efforts, the police have had no luck tracking her down.

“I’m watching news and police updates closely to see if anything else comes up,” Tabidze said. “Unfortunately, we don’t have anything right now.”

She said her husband seems stable in prison at the moment and is not currently on medication. After the first stabbing, he had been undergoing a weekly psychological evaluation.

“It’s quite the bizarre history to the whole matter,” Barry said. “We’re just going to have to find out what kind of evidence they have (against Vakhtang) at the two preliminary hearings.”

Timeline of a disappearance:

• Oct. 8, 2009: Makhniashvili’s backpack is found in a parking lot in the Yonge and Eglinton area. The backpack is the first and last physical clue in the case.

• Oct. 27, 2009: The RCMP receives a report that the missing teen has been spotted outside Calgary.

• Dec. 2, 2009: The RCMP receives word that Makhniashvili has been seen in Grand Prairie, Alberta. Police find no evidence that she’d been in the province.

• Apr. 3, 2010: The Makhniashvilis, along with friends and supporters, hold a gathering at Yonge Dundas Square to remind the public of the story.

• May 7, 2010: Mariam’s father Vakhtang is arrested following a stabbing incident in the family’s apartment building. Police allege that the man pushed his way into a 26 year old neighbour’s apartment and stabbed him in the abdomen.

• Nov. 1, 2010: Mariam’s brother George goes missing. He is found the next day after riding his bike from the family home to Vaughan after an argument with his father over George’s plans to become a musician.

• Nov. 4, 2010: Vakhtang is arrested in connection with a stabbing in the double stabbing of David and Delores Langer at their Leslieville near Greenwood Avenue and Queen Street East. He is later charged with attempted murder. 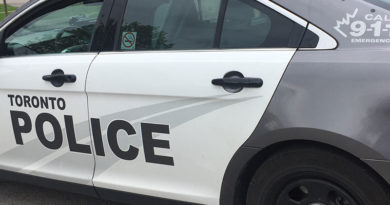 Police seek suspect in double stabbing near Danforth and Main