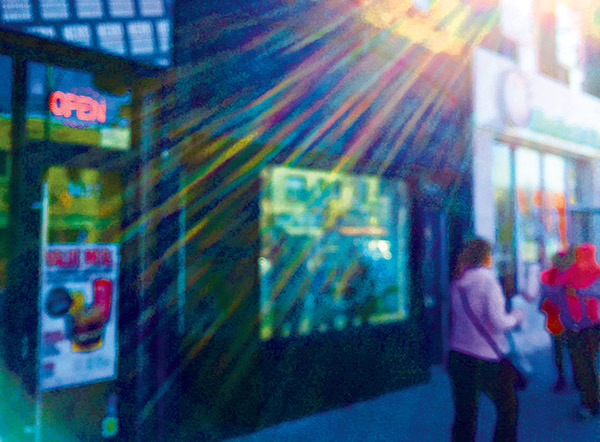 THE LITTLE (POT) SHOP AROUND THE CORNER: Eden Medicinal Society on Bayview Avenue has been raided by police, attacked by the local councillor and criticized by at least some area residents, but it still appears to be in business.
Edition: Leaside
NEWS
December 4, 2016April 12, 2017 Rodger Burnside Eden Medicinal Society, Jon Burnside, marijuana, marijuana dispensary, Toronto Police

Ward 26 councillor Jon Burnside is gratified a Leaside marijuana dispensary was raided just days after he called for it to be shut down.

The raid “absolutely” came as good news to him, and he “absolutely” wants to see the shop closed down for good, he told the Town Crier.

Three people are facing charges after officers from 53 Division executed a search warrant at Eden Medicinal Society at 1625 Bayview Ave. on Oct. 19 just after 2:30 p.m.

Three 24-year-olds were arrested and charged with one count each of possession of a substance for the purpose of trafficking and possession of proceeds of property obtained by crime.

Burnside said in his Oct. 17 blog, “While we are home to only one of 130 reported shops across the City, it is one too many.”

At the time police could not comment on the Bayview Avenue store, although they had recently closed down nearby marijuana stores on Eglinton Avenue East and Mt. Pleasant Road, according to Burnside’s website. However, they assured him “they will continue to work diligently to shut down any pot shops in our midst,” he said in the blog.

However, he did not take credit for the police action just two days later.

Police have to go in and buy marijuana, then test it to make sure it is weed, then go in and buy again before they can get a warrant to perform a raid, said Burnside, himself a former police officer. “These things take time.”

Charged are Melissa McLennan, Jaime Cortez-Granilo, and Katherine Woods, all of Toronto.

Eden has been open at the same location on Bayview south of Fleming Crescent and Manor Road since the raid and charges.

Staff would not discuss the matter and the store owners did not respond to our requests for an interview in mid-November.

Burnside told the Town Crier that storefront sales of marijuana are illegal and he was surprised the province hasn’t stepped in to deal with marijuana dispensaries. “You can be damn sure there’d be an issue if [these shops] were selling booze. If you were selling booze without a licence, they’d be all over you, they’d close you down tomorrow.”

He said the issue was not whether he thinks pot should be legalized. “The issue is we don’t know what the hell they’re distributing and we know the production of pot and that whole trade is largely controlled by organized crime.”

However, Eden Medicinal Society is actually quite plainly decorated, sparsely furnished and is meagerly stocked. In the mostly empty space only a few counters display any product, medicinal or otherwise.

The merchandise is mainly jars of small quantities of marijuana in leaf form with fanciful titles like Moby Dick, Pineapple Express and Sweet Skunk. Popular sellers are small jars of shutter — described by staff as “THC (the active ingredient in marijuana) in its purest form” — which provides oil for vaping. Also available is THC-infused butter and oil for cooking.

Edibles, like cookies or brownies, cannot be sold, since the store cannot control the amount of THC in them, says staff.

A customer, who gave his name as Asteriaith — named after a video character he created — said of the store, “I love it. It’s the best customer service without a doubt anywhere in the city.”

The 21-year-old North Leasider said he found the store conveniently located and likes that it takes debit, unlike other shops in the city.

Burnside also said in his blog that, judging by the calls he’s received from local residents his view that the shop should be shut down “is shared by many”.

While this may be true, it was hard to prove by an informal survey of its neighbours and people passing the store in early November. The responses were mixed at best.

Susannah Hill, 28, manager of a nearby store, said that, “speaking personally and not for the store owners,” she’s had “no problem with them … they haven’t interfered with us one way or another.”

Hill, who grew up in Leaside, said she’s never heard a customer or other merchant on the street mention anything about the marijuana dispensary.

“I’m not upset about it,” said a woman who was walking by the store and said she lived just west of there. “I wouldn’t be upset if it left either. I don’t think it’s very busy.”

Another woman living in the same area said she was “not opposed to it if it’s well managed”. However, she felt the shop was being deceptive with its discrete sign. She went into the place once, thinking it was a clothing store, she said. “It’s kind of a fake-out — so low-key that people are not outraged.

An elderly woman who lives in Leaside said she opposed the store being there and said she hoped teenagers wouldn’t be drawn to it. But a younger woman with her said it was fine with her.

A man who lives just west of Bayview said he was not aware of the store but he would not be opposed to it. “If you’re looking for the upset crowd, you won’t get it here.”

— with files from Shawn Star

Red Knights down boys in blue