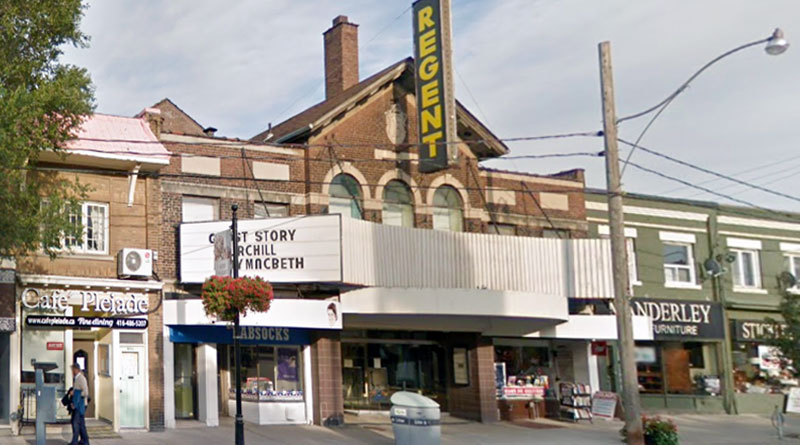 Davisville resident Sarah Hill ducked out from the Save the Regent Theatre forum Jan. 22 to share her passion: preservation of heritage buildings.

The Toronto and East York Community Preservation Panel, of which she is vice chair, was thrilled by the turnout of more than 100 people at Greenwood College School to brainstorm ideas to save the Mount Pleasant Village landmark at 551 Mount Pleasant Rd.

It’s been up for sale since Dec. 22, when owners, the Sorokolit family, enlisted Patrick Cowie of Colliers International to sell it for $9 million.

“It’s great to see that the community is interested and has ideas,” Hill said. “There are options if you stop to talk about it.”

Ward 22 councillor Josh Matlow set up the public meeting to discuss what to do with the property.

Many from the Davisville area shared ideas and underscored the importance of heritage and culture.

The theatre was granted heritage status in May 2017. It opened in 1927 under the name Belsize Theatre. It was designed by architect Murray Brown, who was a fixture in the design of movie houses across the country. In the early 1950s, after a two-year renovation, the theatre reopened with a new name: Crest. Volleying between filmhouse and live theatre, it didn’t get its current name, Regent, until 1988.

Matlow didn’t want that history to go to waste, or become another Shoppers Drug Mart, he said.

“I’ve been reaching out to the family that owns the Regent and Mount Pleasant theatres for years now because in the world of SilverCity, many of our local neighbourhood theatres are threatened,” he said in a January phone interview.

Matlow invited members of the community and sent out invites to organizations like Artscapes, who saved the Wychwood Barns from the demolition crew, as well as Danny and Letty Mullin who helped to resurrect the Revue Cinema on the Roncesvalles strip.

“I’d also like to find ways to honour the family’s legacy there as well,” Matlow added.

The Sorokolit family has been quiet on the community’s involvement, Cowie mentioned in an email this is the only property owned by them on the market. They also own the Mount Pleasant Cinema at 675 Mount Pleasant Road.

Cowie said the family is happy to work with a buyer who wants to preserve the theatre, “but ultimately they want to sell.”

Ten years ago, an anonymous buyer came forward with an offer, but it never came to fruition.

Matlow said he will continue to hold events to keep the community involved.

Hill said having a proactive councillor steering the conversation towards preservation makes her job a lot easier.

“In the grand scheme of heritage preservation, a building that continues to be used will be preserved,” she said. “The best way to do that, or the most appropriate way of doing that is usually maintaining its built purpose, and that is a performance space.”