Dr. Sharon Baltman, 66, sits in her office, located at the front of her Bathurst Street and St. Clair Avenue West home.

An old roll-top desk sits behind her, filled with papers and books. It is from here she is pulling back the curtain on the medical profession.

She’s candid, and says the impetus for her self-published memoir Escape From the Bedside was two-fold: she wanted to illustrate how hard it was for women to become doctors in the 1960s and ’70s, and also to knock down the ivory tower she believes still exists today.

“It’s a picture in time that not a lot of people know about now,” she said in an interview. “These are strides that the feminist movement has pushed this agenda to, where we are now, and I think it gets taken for granted that women are in these roles.

During her final year in high school, in 1964, Baltman’s aspirations of being a translator for the United Nations were dashed by a guidance counsellor, who told her her she could hope only for becoming a teacher, a secretary or a nurse.

Baltman’s rebel spirit — possibly stemming from her being the middle child in a brood of five — was intent on shattering that glass ceiling. She promptly set about pursuing a career in medicine.

She said she consulted different people about her choice, only to get responses such as, “Oh, you’ve got long, painted, purple fingernails — you can’t do that in medicine” or “A girl like you with big breasts can’t fit in medical school”.

After graduating from medical school in 1971, her first job landed her with an alcoholic doctor, whom she would on occasion have to send home for being inebriated on the job.

“I was never taught in medical school how to deal with that,” she said. “I had to find my way to deal with it.

“There was no way to deal with this stuff. You didn’t report another physician.”

Laws have since been put in place compelling doctors to report it “if we hear about an issue from a patient about another doctor,” but Baltman says she felt it necessary to expose an issue of another type: the lack of bedside manner of many of the male doctors she worked with who do not listen to their patients.

“This is what the escape (in the book) is about — that I wanted to know more about patients and hear patients’ stories.”

That kind of practice is known as narrative medicine, and was brought to light in 2006 by Columbia University physician Rita Charon.

“That’s what I mean by this silo: ‘We know everything. We’ve got the answers. Either there’s something wrong with you, or you’re being obstreperous — a troublemaker’,” Baltman said, miming the actions of an obstinate doctor. “(Narrative medicine) is what I was moving towards my whole career — to try and ask the patients what their side of the story was.”

It’s the type of practice she has now, as a psychotherapist, which she transitioned into beginning in 1986.

The rest of her memoir tackles the challenges she faced when her profession collided with her personal life, as well as some of the lessons learned.

“My mother was a big influence in wanting me to be independent,” Baltman said. “Her expression was that she wanted me to stand on my own two feet, because she could never do that.”

And that proved to be the catalyst in shaping a rebel spirit. 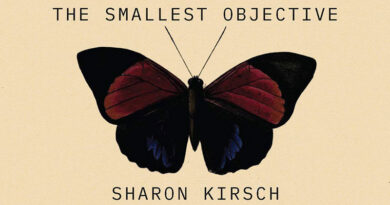